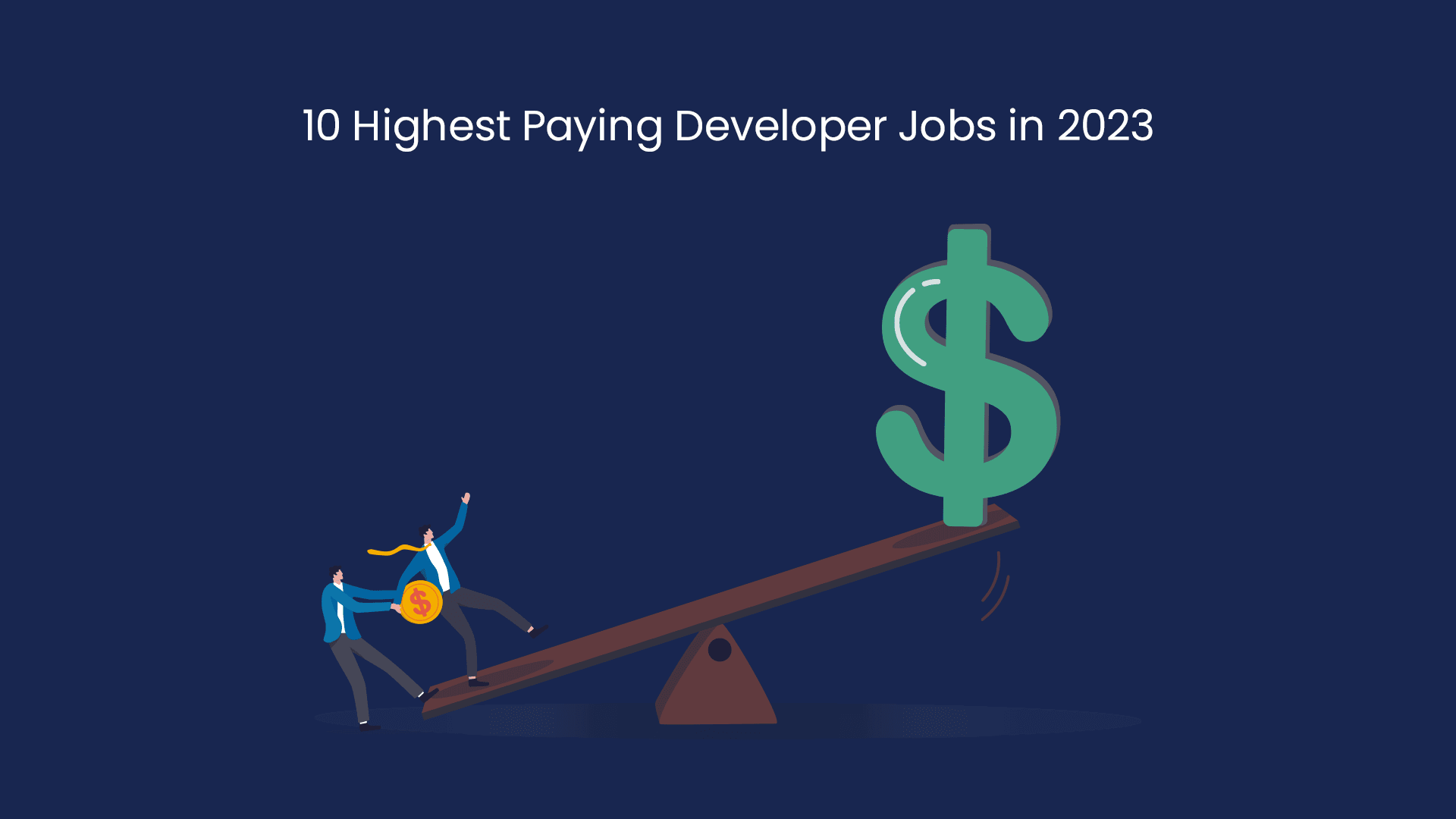 Amidst record-low unemployment in 2020, many businesses faced the biggest challenge of building out their tech teams with top candidates. The global pandemic forced organizations in nearly every industry to shift their focus from growth to survival only months later.

As of May 2021, computer and information technology (I.T.) professionals earned a median salary of $97,430, according to the U.S. Bureau of Labor Statistics (BLS). That's significantly higher than all occupations' average salary of $45,760.

Despite the effects of COVID-19 on the economy, average technologist salaries in the United States increased by 3.6 percent between 2019 and 2020, reaching $97,859.

What do technology jobs pay? As per Zippia, over 329,500 Software Engineers currently work in the United States, with the top 10% earning over $113,000 per year.

In a market where software savvy is increasingly a marker of commercial success, developers are crucial to steering growth within the enterprise. Running technology in a business has become its own business.

With the shift to digital commerce and consumers working, shopping, and managing their lives from home, companies are spending billions of dollars to showcase their technology. This is to stay ahead of the competition. Therefore, the need for software creators is enormous.

Remotebase provides immense value to ensure everyone has access to digital gains by catering to the highest-paying tech jobs on the market.

If you’re a software engineer who’s finding his grind, check out how Remotebase continues to recruit a pipeline of exponential developers for Silicon Valley startups and more.

And if simply on the hunt to know what do technology jobs pay? You’re in luck! Keep on reading to stay in the know.

In the digital age, leaders look to developers for help, making killer ideas a reality. As tech know-how is the new currency of the industry, recruiters are being asked to launch developer hiring drives. Whether they coax new graduates into applying, host coding boot camps, or simply poach those with desirable experience.

Moreover, developers have the opportunity to gain a wide range of experience through remote work and to work on their own terms instead of adhering to more traditional full-time employment.

A testament to the value these professionals add to businesses is the fact that some of the best-paying jobs are in tech, so having one or more programming languages will make you extremely appealing to recruiters.

In a seemingly uncertain economic climate, software jobs are a lucrative and secure employment field because businesses are scrambling to find the talent they need to keep up with the times.

The O'Reilly Data and A.I. Salary Survey for 2021 suggest that developers who work with niche programming languages earn higher average salaries than their more common counterparts. 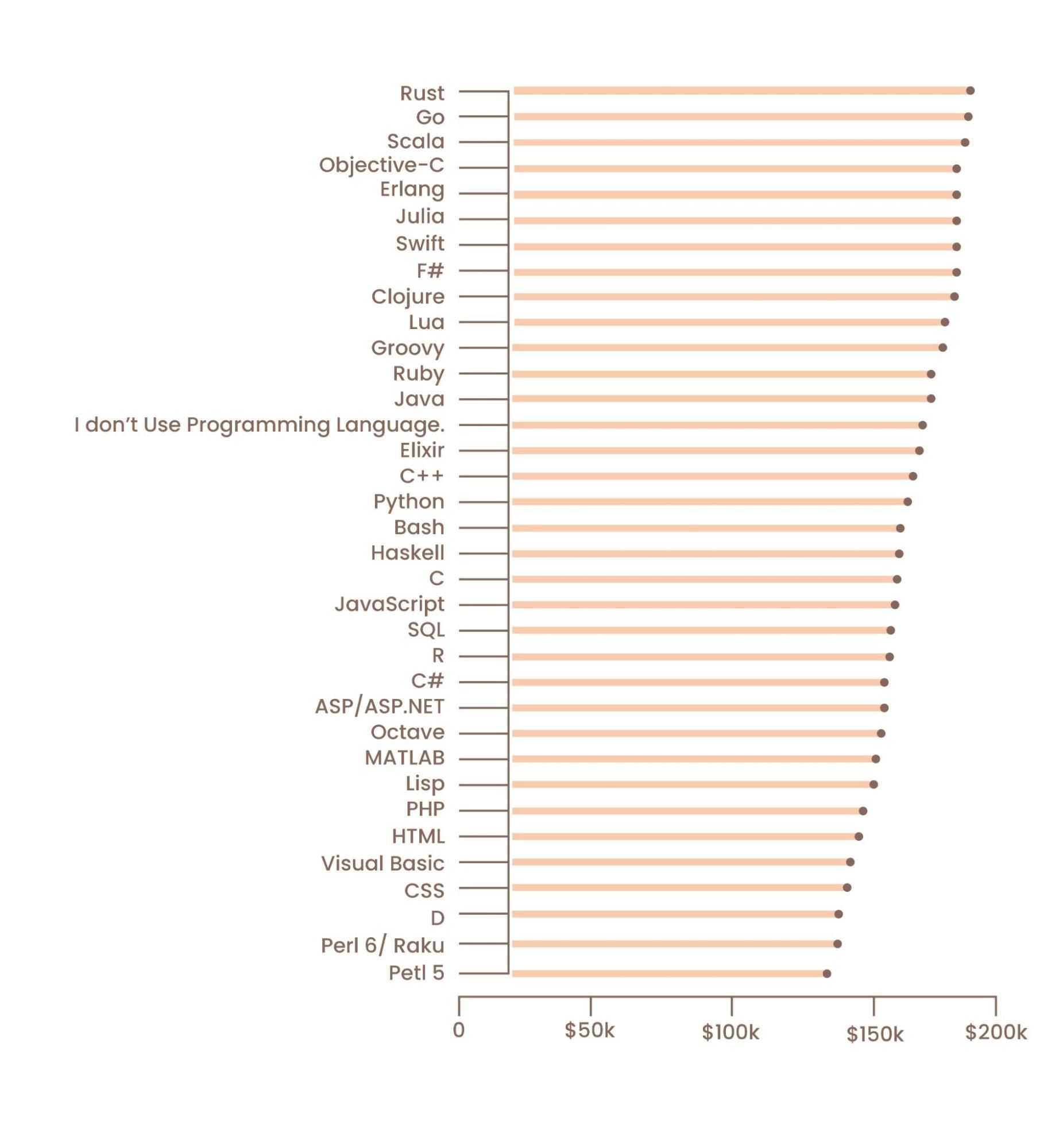 Python, SQL, Java, and JavaScript were among the most widely used and popular programming languages, according to the survey.

On the other hand, less common languages were associated with higher salaries, including Rust, Go, and Scala, as well as Erlang, Julia, Swift, and F#.

In today's job market, developers are royalty. But before businesses begin rolling out the red carpet, they need to think about how to attract and motivate the best developers.

Hired CEO Josh Brenner said organizations should think of remote working as an opportunity to "rethink their hiring and recruiting strategies and approach staffing challenges in a different way."

Are you a recruiter? Read our blog to discover some budget-friendly pro tips on the cost of hiring a software engineer in 2023.

A global tectonic shift is being driven by advanced I.T., both culturally and economically, as the world we live in becomes ever more connected. Every day, it seems as if the Internet of Things grows by a million more 'things' - from the high-powered phones we carry in our pockets to the ever-growing ecosystem of devices, databases, servers and software, websites, and apps.

As a result, it is not surprising that the career landscape in information technology is also growing rapidly.

When it comes to technology, you might be wondering, what do technology jobs pay? Going back to the Dice 2022 Tech Salary Report, the average salary for technologists also rose by almost 7 percent between 2020 and 2021, reaching $104,566.

Recruiters may be smitten by data scientists and machine-learning specialists, but traditional web and mobile app developers remain indispensable.

Businesses continue to hire full-stack engineers mainly because they are capable of handling both client-side and server-side code, so they don't have to hire separate front-end and back-end developers.

This can also be attributed to the fact that JavaScript continues to rank among the most widely used and in-demand programming languages in the world due to the need for web developers.

In the survey conducted by Stack Overflow for the year 2021, JavaScript was ranked as the most common programming language for the ninth consecutive year. "For most developers, programming is web programming," the survey's authors remarked.

Here is an overview of some of the top most lucrative and highest-paying I.T. jobs for the years to come, based on research from Glassdoor.

There has been an evolution of the role of the developer as much as certain programming languages, frameworks, and technical disciplines have evolved over time as well.

DevOps is an emerging set of practices adopted by organizations that want to speed up their development lifecycle by integrating software development and I.T. operations functions into one entity.

The purpose of DevOps is to bridge the friction that silos create, and the rest is to engineer the application.

Data scientist is another one of the highest paying jobs. Using their knowledge of statistics and modeling, these I.T. professionals analyze complex data gathered from multiple sources in order to make sense of it. As well as strong statistical, mathematical, and computer science backgrounds, data scientists need business savvy and communication skills.

In this role, it may be necessary to have knowledge of programming languages such as Python, Java, and, increasingly, R. Machine learning skills are also of great importance.

One of the best paying technology jobs. The full stack J.S. framework is designed to write all the components of a web application, including the client side and the server side, using JavaScript and JavaScript tools.

As far as a web application is concerned, the fullstack includes everything from the technology it runs on to the database to the user interface. This includes the business logic for the front end.

In order to build a web application, a fullstack JavaScript developer should be able to create both the back-end code as well as the front-end code. They should not just be capable of creating the app itself but also the databases, APIs, and user interface.

Rated 4th under the highest paying tech jobs, engineers who specialize in machine learning design systems that automate predictive models. By learning from past experience, the machine analyzes the output and uses it in the future.

In addition to drawing and analyzing data, they are also responsible for pattern and image recognition. They have to have a comprehensive command of technology, coding, and mathematics so that they can perform their jobs efficiently.

Moreover, they must also have experience coding applications for popular platforms, such as iOS and Android.

In order to prevent the loss of important company information, Cloud Engineers assist companies in moving their information technology methods over to the Cloud. They ensure a company's cloud management system is safe, secure, and updated so that it backs up data on a regular basis.

Site reliability engineers monitor application performance and must possess a comprehensive understanding of the application and code. Essentially, they bridge the gap between development and operations in application production by writing code like any software developer.

System architects are responsible for designing and developing the company's management systems and products. The blueprints you receive will help you develop processes and solutions based on them. There may be differences in roles and responsibilities, as well as titles, between companies. Since you will be responsible for the functioning and security of a whole network, this job requires a great deal of knowledge and experience.

In any organization, they are the gatekeepers of data security, ensuring that these systems are monitored, reducing vulnerabilities, and preventing cyberattacks.

A software developer's technical skills are only half the story; they must also possess certain transferable skills. Here’s an infographic for your hungry mind.

Demand for tech-based roles remains high despite fears of a looming recession and hiring freeze at some major tech companies. The past two and a half years have seen most companies increase their dependence on – and investment in – technology.

The result is that a number of gaps in their workforce have to be filled, including I.T. security, software development, I.T. support, and data analysis.

Remotebase is trying to fill that gap by hiring the top 1% of developers for tech startups in Silicon Valley. Putting the right people in the right jobs.

Ready to take on that developer job? Apply here!

The average salary of a programmer is $74,000 per year in the US, which is well above the average national salary. Programmers can earn even more with additional experience, certifications, and specialization in other programming languages.

2. What are some of the highest paying developer jobs?

3. Which programming language is the highest paying?

Some of the highest paying programming languages are: