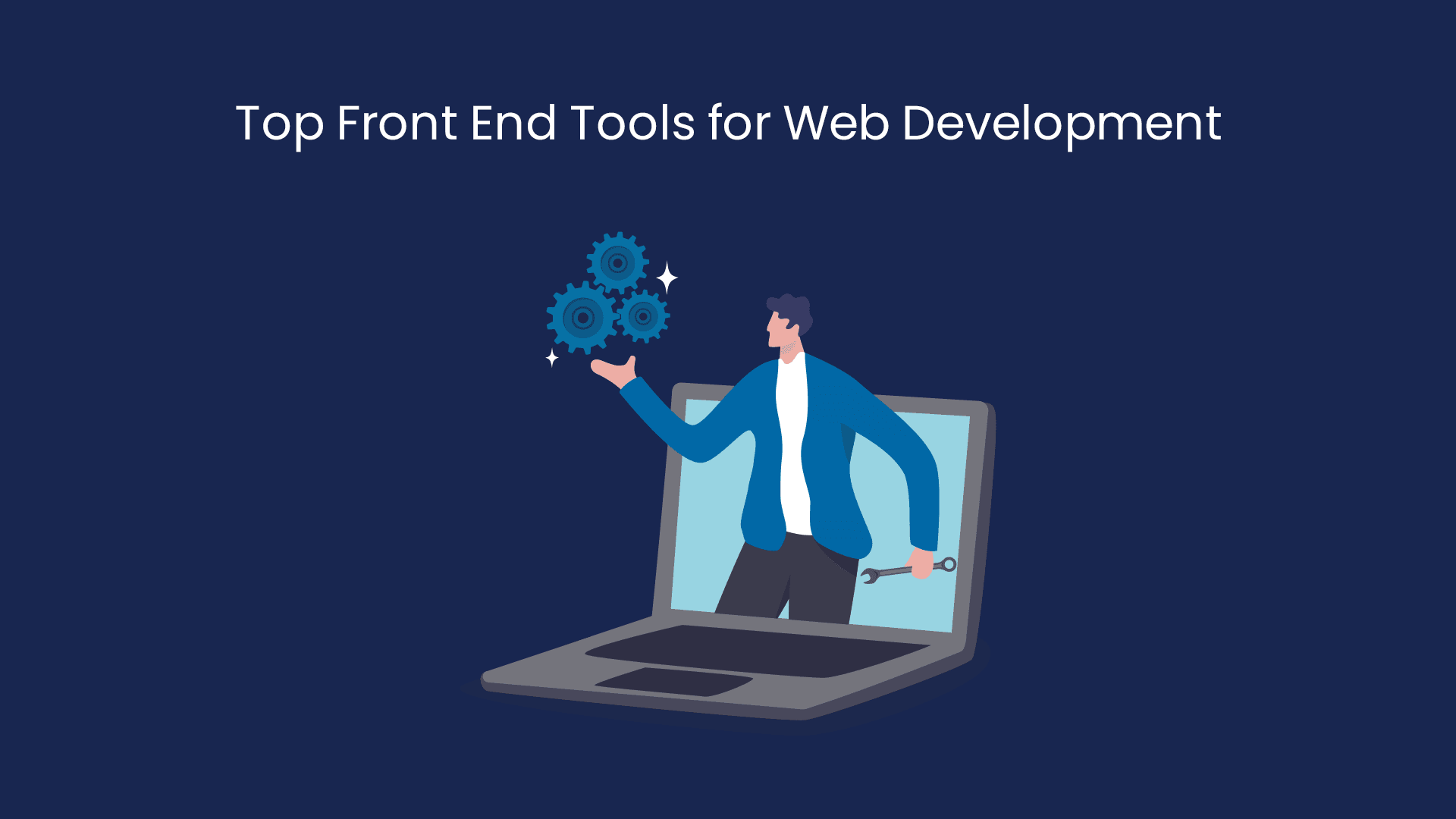 A front end developer's primary focus is on the user experience. They use related coding and design techniques to create elements of applications that end users can directly access.

The goal is to create a simple, easy-to-use, fast, secure interface that fosters engagement and interaction with the user.

With the latest design and technology trends geared towards the front end, you can build increasingly sophisticated designs and interaction patterns.

The complexity of front end development has, however, increased, so much so that it has become a specialized field requiring a high level of expertise.

Over the past few years, the major trend in front end development has been the development of apps for mobile and smart devices, with users accessing these apps from a growing number of devices with different screen sizes and interaction options.

Due to this, front end developers need to ensure their applications deliver a consistent and high-quality user experience across all devices and scenarios.

In spite of this, there is a wide variety of web application development tools available, and determining which one is best for your needs can be difficult.

The following list provides a comprehensive overview of some of the top front end alignment tools for web development.

A web application can be classified into six types.

Static web applications are based on HTML and CSS, but they contain no dynamic elements, are designed only to display content and data, and do not allow users to interact with the server.

As a result, portfolio websites and official company websites, which are common, are relatively easy to build, modify, and manage.

Though these applications are static, they can include animated banners, videos, and GIFs.

A dynamic web application allows a user to interact with the server, i.e., it accepts the user's request and generates content in real-time.

It is possible to build these applications using a variety of web languages, but PHP and ASP are the best for structuring content.

A web application for e-commerce, which promotes and sells products or services online, typically provides a variety of features that simplify the purchase process.

Typically, these are interactive applications that users can interact with and that you can integrate with other systems to manage interactions and inventory more effectively.

The JavaScript API, including XMLHttpRequest and Fetch, loads a single document into a single-page application (SPA) to display updated content.

This results in increased performance and a more dynamic user experience since users don't have to download new pages from the server.

A progressive web application (PWA), or a website that functions as a mobile application through its native features, does not require users to purchase software or download apps from app stores. Using a search engine, users can locate PWAs in their browsers and access them.

PWAs aim to blur the distinction between native and mobile-web applications by offering many benefits to mobile browsers.

Independent software vendors (ISVs) can contract with cloud providers to host their applications as part of the software-as-a-service (SaaS) delivery model. A cloud provider can also serve as an ISV.

Typically, SaaS applications run on host servers as a single instance of a single application. As a result, that instance serves each cloud tenant or customer while the application runs on the same version and configuration slated for all customers.

Using the same infrastructure and platform allows multiple customers to run on the same cloud instance despite their separate data.

With this setup, cloud providers can apply changes to all customers via a single, shared instance, performing maintenance tasks, fixing bugs, and delivering updates more efficiently.

Web Development Tools: What Should You Look for?

The following aspects were taken into account when choosing the best tools for web development:

Ensure that your chosen tool matches your requirements and capabilities before investing in it.

Regardless of the size of the project, the tool should be able to handle it.

Pricing is another consideration since some web developer tools are free, and others require subscriptions.

Your programming language should be compatible with your chosen web development tools.

In case of software problems, determine whether the web development tool provides adequate support and assistance.

Recommended reading: How to Improve Front End Developer Skills in 2023? 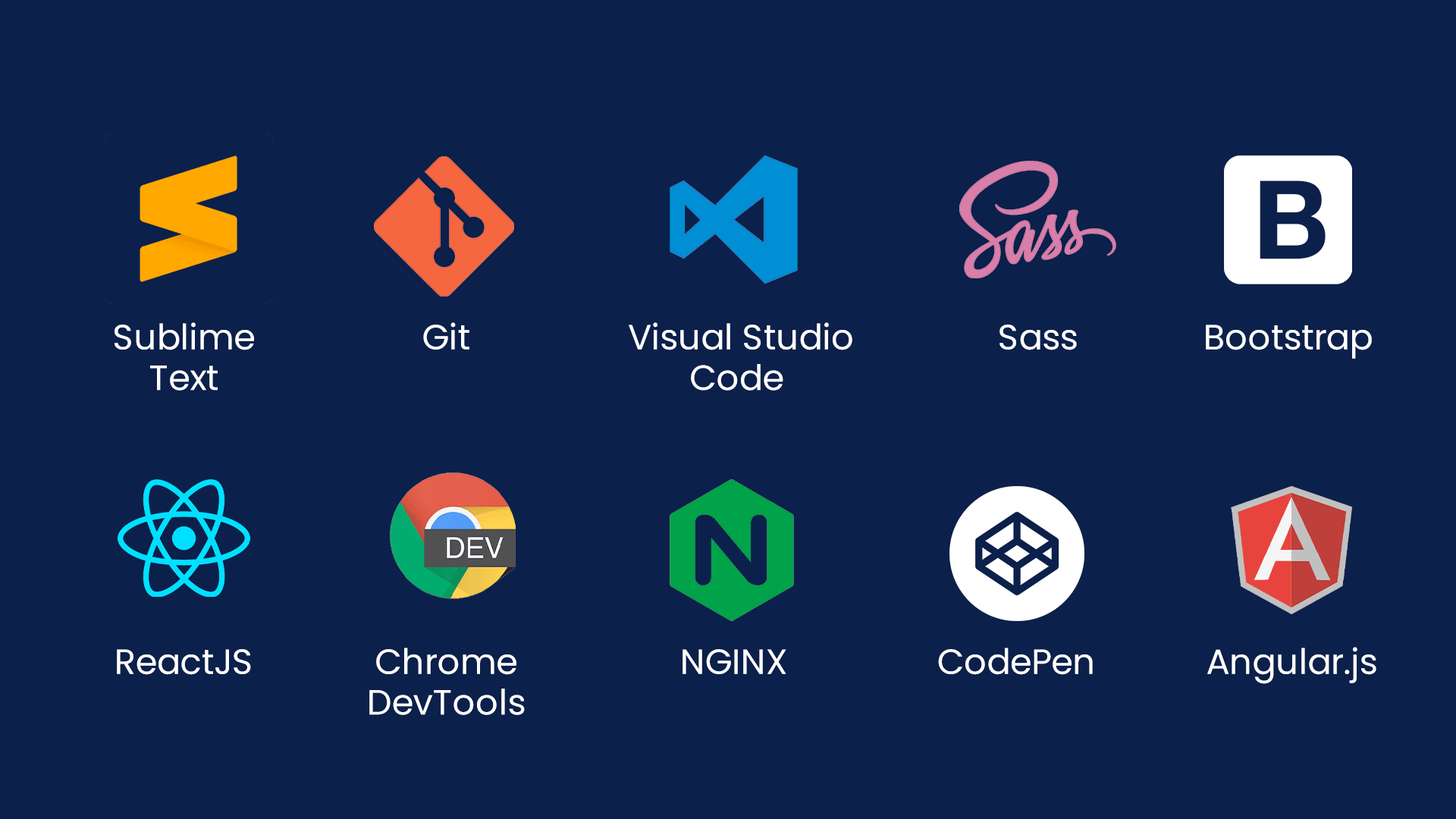 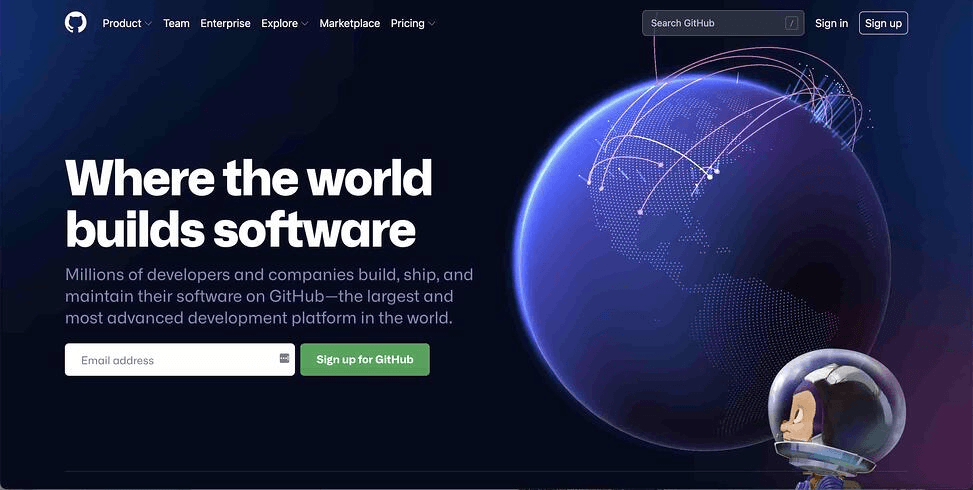 Version control software like Git lets you track changes made to digital files. It's most commonly used for programming, where it's used to manage code.

Programmers can use Git to view every change they make to the code and even return it to a previous state if needed.

As a result of its ability to allow programmers to collaborate on the same code without overriding one another's changes, Git has become an indispensable tool for web developers.

In addition to being fast, scalable, open-source, decentralized, and free, Git is the most popular version control system in use today due to its features like these.

Project management and organization features are also built into GitHub, making it even easier for team members to collaborate and communicate.

VS Code is a free, open-source code editor created by Microsoft in 2015. Linux, macOS, and Windows are all supported.

According to Stack Overflow's annual survey in 2021, 70% of professional Web Developers have reported using VS Code since its release, making it the most popular tool in the world among developer environments.

Furthermore, web developers enjoy that VS Code can be used with a variety of programming languages, and extensions can be added to customize the application to suit their needs.

This preprocessor is also called SASS and stands for Syntactically Awesome Stylesheets. A CSS page structure is one of the three core front end development languages used for defining the layout and style elements of a website.

By simplifying the styling process and reducing repetition, SASS was developed to ease the repetitive nature of CSS coding.

Because of its unique features, Sass is considered a pioneer in the field of CSS preprocessors. Since its release in 2006, Sass has maintained its popularity due to its additions to CSS, including variables, mixins, imports, inheritance, nested rules, and built-in functions.

The Sass CSS preprocessor remains an indispensable tool for front end web developers because it is reliable, powerful, and well-supported. 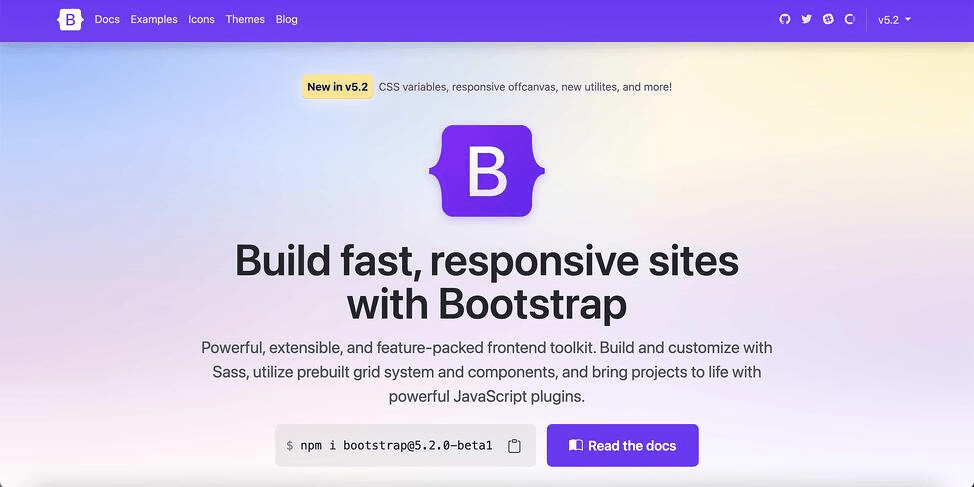 The Twitter Bootstrap framework, created in 2011, is another top-of-the-line UI tool. It's an open-source framework that features customizable JavaScript templates and allows programmers to create responsive websites quickly.

A go-to framework for the web industry, Bootstrap is currently used on more than 22% of all websites, thanks to its flexibility and ease of use.

In place of repeatedly programming each element individually, developers use Bootstrap to create the basic structure of a website and set HTML style definitions. The presence of this framework ensures that the website maintains a uniform appearance across different browsers.

This collaborative workspace is for front end developers and designers. It enables you to create and deploy a website, show off your work, create test cases, and get ideas from others.

The goal is to progress more quickly and smoothly. It enables you to develop, deploy, and test websites and improve your coding environment.

A dynamic and responsive website can be created using the Basic HTML framework and DOM methodology. A few of the highlights of AngularJS include two-way data binding, dependency injections, templates, directives, and testing features.

For creating modern, responsive user interfaces for web and mobile apps, ReactJS is a JavaScript library. A major advantage of ReactJS is the ability to write and build components easily, making development easier.

In addition to server rendering, React VR can also be used for mobile apps with React Native. Developers can use it to create 360-degree virtual reality experiences.

NGINX is an open-source web server software that can be used as a load balancer, HTTP cache, and reserved proxy. Over 110 million sites worldwide use NGINX Plus and NGINX Open Source to safely and quickly distribute their content.

With its ability to handle multiple connections at high speed, NGINX is perfect for creating resource-intensive websites. LinkedIn, Netflix, and Pinterest are among the many sites that use NGINX.

You can fine-tune the server to your needs with its configurable settings. Multiple protocols, SSL/TLS encryption, HTTP authentication, URL rewriting, and load balancing are all supported. 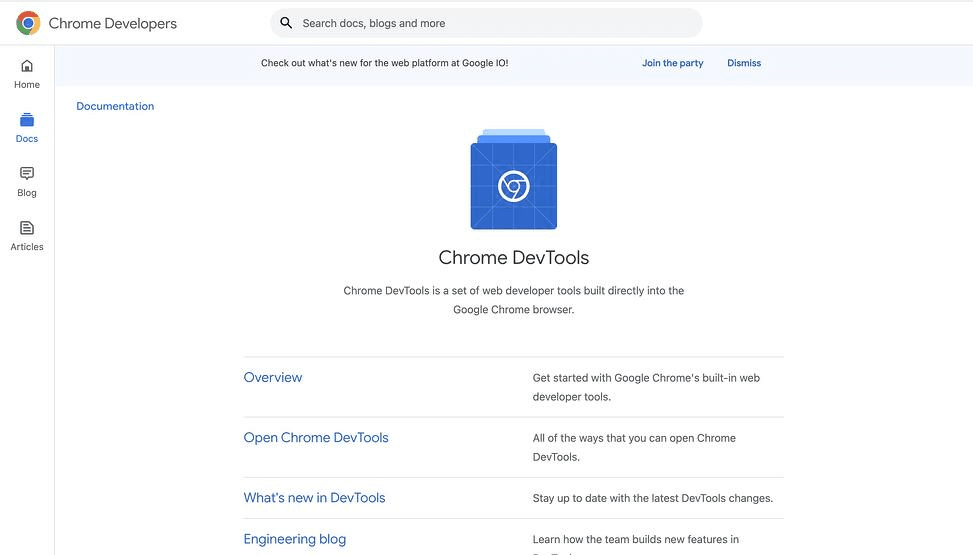 Front end web development tools such as Google Chrome DevTools help you edit and diagnose problems with websites directly from the browser.

Chrome DevTools lets you easily edit and debug HTML and CSS code in a real-time environment.

Additionally, it provides numerous prominent advantages, such as identifying run-time performance issues using the timeline, testing the responsiveness of a website with the ‘Device Mode,’ using the ‘Sources Panel’ to debug JavaScript using breakpoints, viewing and debugging network activity with the ‘Network Panel,’ and many more. 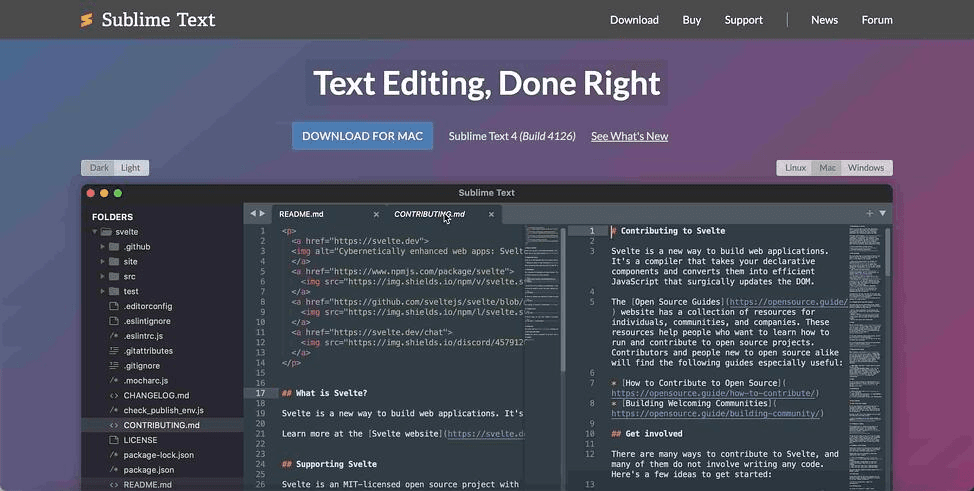 Sublime Text is a user-friendly programmer's editor written in C++ and Python and offers a wide range of programming languages and markup languages. It's one of the most popular code editors on the market today.

A wide range of shortcodes is available in Sublime, allowing you to write code with an autocomplete code editor, saving you time and improving productivity.

For your developer career, the best web development tools are those that work for you.

But that's only half of the equation. With tools, you also need a sharp caliber to bring the results you desire.

Are you looking for a life-changing front end developer job? Remotebase hires the top 1% of remote developers and allows them to work with Silicon Valley clients, offering unmatchable benefits and growth opportunities for talented developers.

Which three web technologies are most commonly used for front end development?

What are the 3 types of web development?

A web developer can fall into three types of roles: those who specialize in the front end user interface (front end), those who write the underlying code for running all website operations (back end), and those who manage everything about a website (full stack).

In front end development, which language is most commonly used?

In front end development, HTML (HyperText Markup Language) is used widely, which is a markup language used to build websites and web applications.

Ready to take the next step in your developer career?