Go vs Python: What's the difference & Which one to choose

We've all heard the debate between Go and Python. Some swear by one, others swear by the other. But which one should you use? And what is the difference?

Python and Go are both very popular languages, with many similarities and differences between them. Though they both have their pros and cons, it might be difficult to decide which one to use in your next project.

In this blog, we will compare Go vs Python and examine each language's strengths and weaknesses to help you decide which one is right for your needs.

So, without further ado, let's examine both the pros and cons of each programming language.

Go is a general-purpose programming language developed at Google. It is statically typed, compiled and garbage collected. It has no runtime except the built-in library. It has a simple syntax and is easy to read, and allows programmers to create smaller, more reliable programs that can take advantage of modern hardware.

Golang is useful for carrying out programming for scalable servers and large software systems. It was built to fill in the gaps in Java and C++ that Google came across while working with its servers and distributed systems.

Go is a simple, fast, and fun language. Its compiler and standard library are very lightweight, so the language features can be easily used in applications written for any platform. Go is gaining popularity and adoption in the software industry. As a result, there are more and more people willing to learn it. There are also many job opportunities for Go developers.

While the language itself is easy to learn and get started with, Go's standard library has reinvented itself over the years, which has led to many confusing decisions on what package to use in particular situations.

It's simple, unobtrusive syntax allows programmers to write less code and focus more on what the code is doing rather than how it does it. It has no classes, just objects, and functions. Its use of indentation in place of curly braces provides a consistent layout that eliminates boilerplate code, making programs easier to read. All the code is contained in modules containing classes and functions, which can be accessed through the import command. There's no need for header files or linking as in C/C++ projects; everything happens at runtime.

Python is a powerful and flexible programming language used by companies like Google to develop mission-critical applications. It's also easy to learn and use, even for people with little or no programming experience. It lets you go from idea to working solution fast and continues to grow with your needs over time. One of the reasons why Python has garnered such a large community is that it really brings the joy back into software development!

The major differences between Go and Python 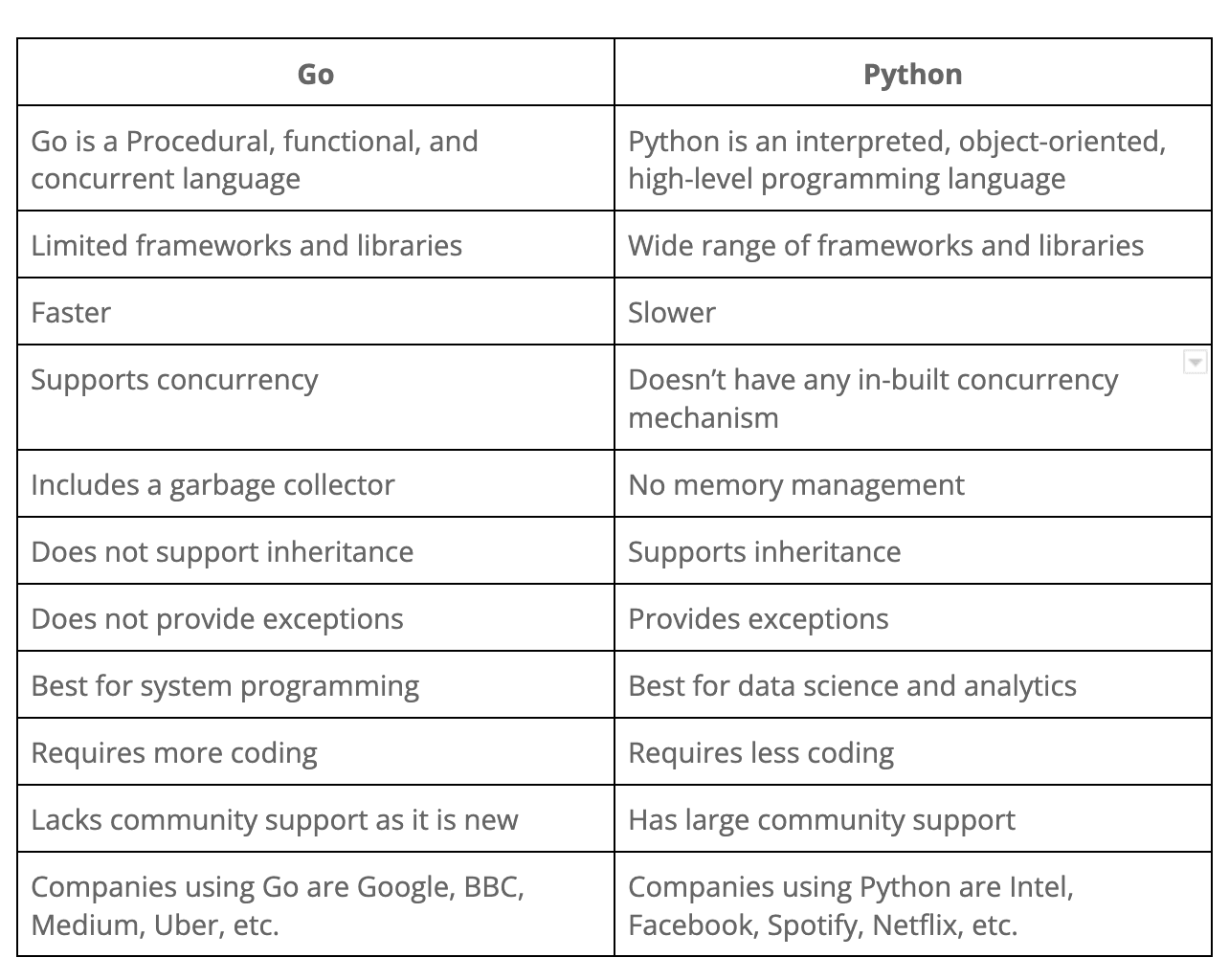 Go vs Python: Which one is best?

Python is interpreted, loosely dynamically typed, with strong object orientation support, and allows a lot of meta-programming and other high-level abstract coding practices. It has a lot of different areas where it is widely used, works well as a scripting language, as a web development language, as a scientific language, data science, and so on. It is flexible and broad in application.

Go is compiled, statically typed, very fast, aimed at the same sort of system programming areas that C traditionally has dominated, but minimizing the problems that traditionally make C difficult to learn and use. It is a fast and really modern approach to system-level programming. It also has some very interesting uses in web coding that make it a distinct and useful alternative to interpreted languages like Python, PHP, etc.

They are very different in their approach, and their core uses. Hence, the answer to which one is better between Go vs Python is that it totally depends upon your needs. For some projects, Python will be ideal, while for some, GO would be a better choice.

How does Remotebase help in hiring brilliant remote Python and Go developers?

Not only Python and Go, but we also hire expert coders in almost all existing and highly popular programming languages.

We offer a plethora of benefits

Want to know more? Have a look at these FAQs

What is the No 1 programming language?

Python is the most popular programming language according to TIOBE and PYPL Index.

Why is Golang faster than Python?

As Python is a scripting language, it has to be interpreted, while Golang is quicker most of the time as it does not have to count on anything at runtime.

Is Go language better than Python?

Which is easier: Golang or Python?

Golang is a simple, easy to understand programming language with simple syntax. Though Python also has a simple syntax, Golang is simpler to learn and work with.

Can we use Golang for machine learning?

For Golang, there are open source machine learning libraries that are stable and well supported. The open-source community has endorsed it due to its rapid development process and many well-supported repositories. Golang is an emerging language that is used for machine learning.

A short conclusion would be that Python is not defeated by Golang in terms of machine learning. For that to happen, Go needs to have more frameworks specifically designed for this purpose since using raw code can seem too time-consuming.