Top 12 Programming Languages to Learn in 2023 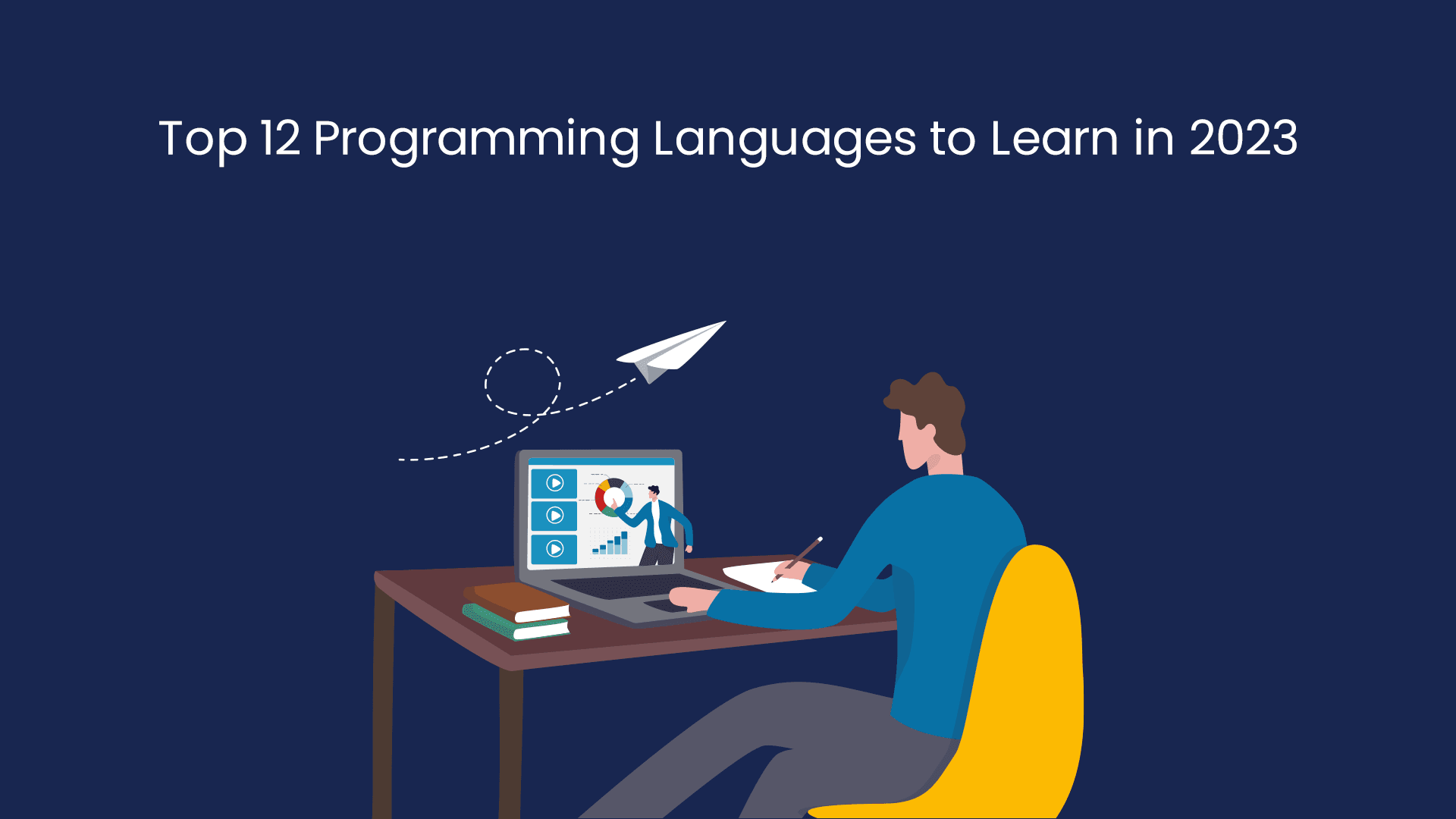 The two most popular programming languages in the startup industry for 2023 are JavaScript and Python.

JavaScript is one of a handful of programming languages that functions across browsers, the language can be used for app development or on the web. As more people use Javascript, easy-to-use frameworks are being shared among the developer community, making writing code in the language easy, quick, and with minimizing room for error.

Python is one of the most popular programming languages because of its accessibility. Python has simplified syntax, a massive community of Python-oriented programmers online that are happy to share their code, and it’s backed by tech giants like Amazon, Google, and Facebook.

If you’re planning to hire developers for your organization, you need to look for experts in the field with exceptional skills in programming languages you’re using.

6. Kotlin: best for integrating into existing apps and programming for Android

10. TypeScript: best for extending the technical abilities of JavaScript 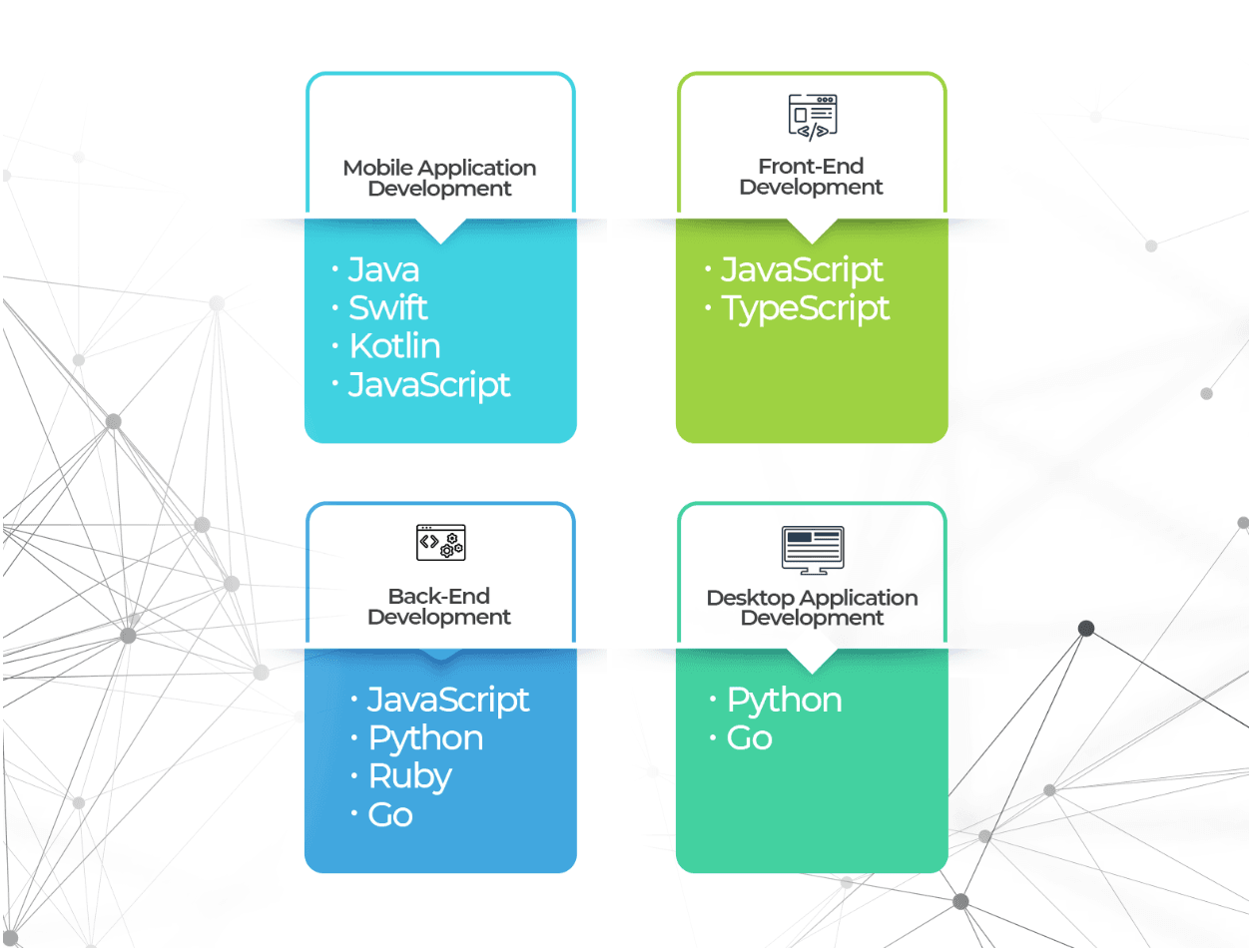 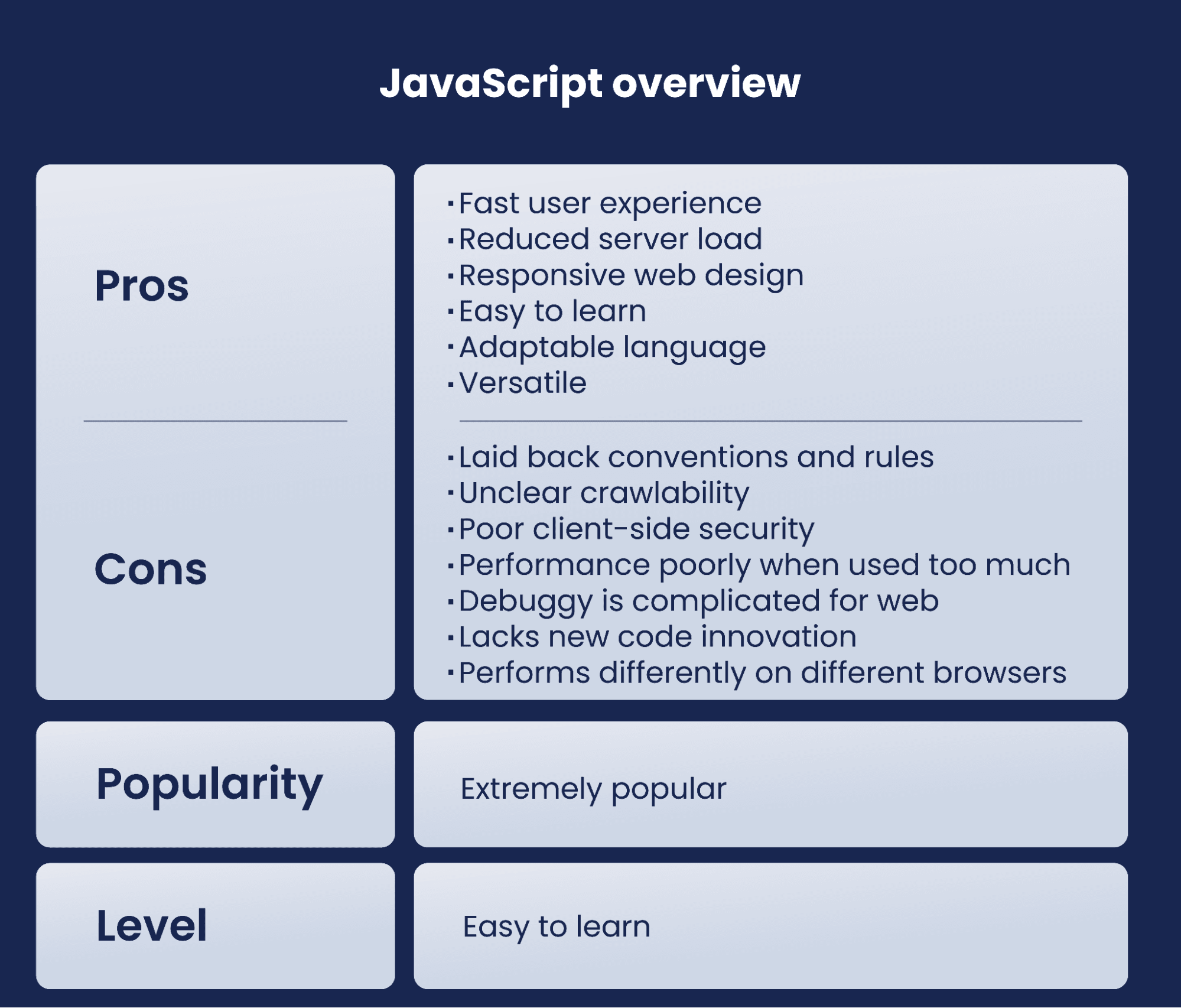 JavaScript is the most popular programming language in use today. JavaScript currently stands as the most commonly-used language in the world (78%). It is used to build websites and mobile apps, as well as server-side software (such as NodeJS). JavaScript is a good choice for beginners because it's easy to learn and quick to develop with.

JavaScript has also been around for a long time which means that there are plenty of resources available online; you'll find plenty of tutorials on how to write JavaScript code and where to get started if you're new to programming in general. It’s certainly a popular programming language.

You can use JavaScript/NodeJS/Angular JS/React JS for building large-scale applications with complex logic that would otherwise be difficult or impossible using other languages such as C# or Python (see below).

The wide range of frameworks available means that developers can choose from various options depending on the type of application they want to build – whether it be web-based systems or mobile apps – while still benefiting from built-in features such as automatic garbage collection (memory management) with NodeJS version 4 onwards! 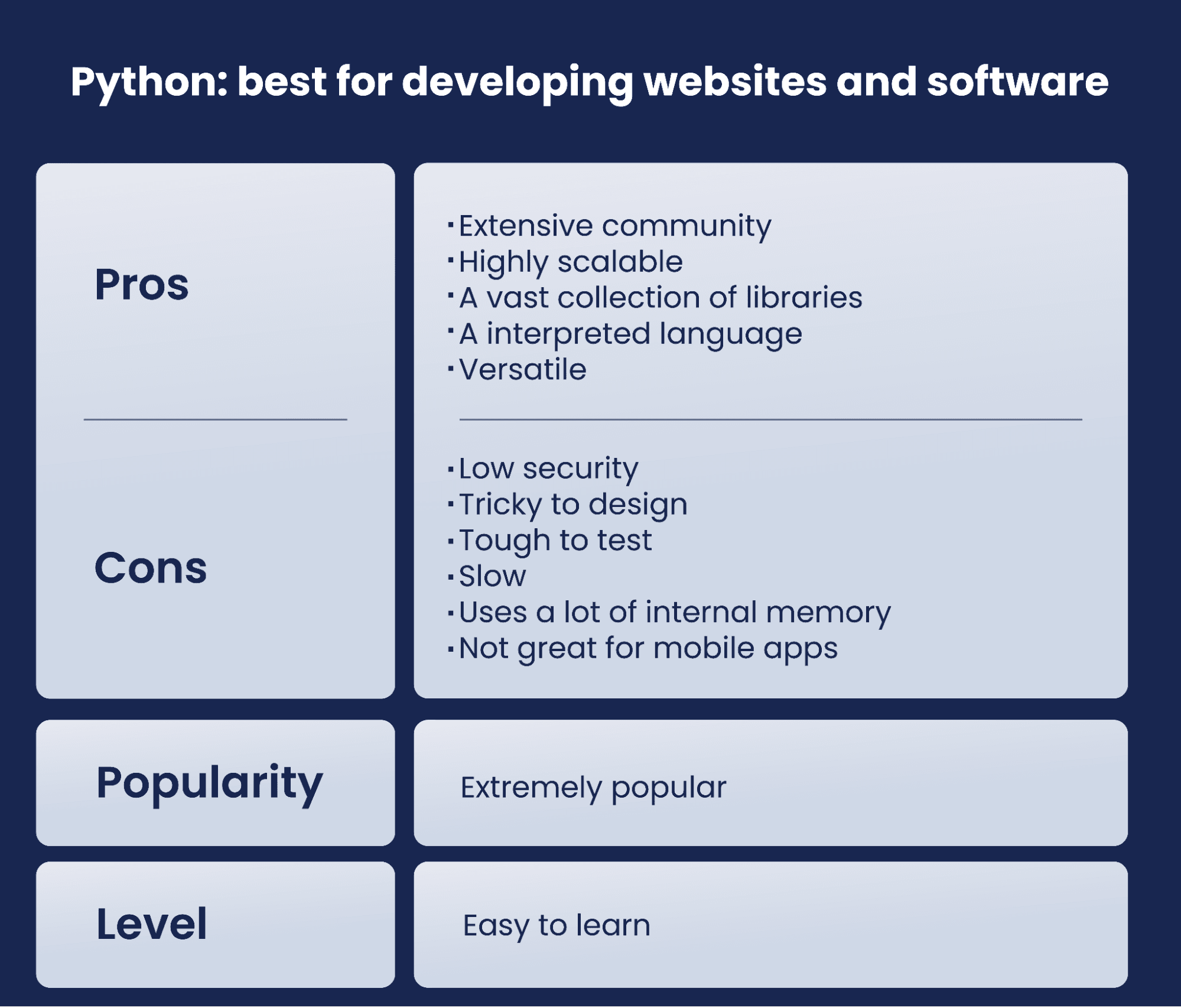 Python is interpreted, interactive, object-oriented and supports multiple programming paradigms. It is an open-source software which means it's free to use and has a large standard library that provides many useful tools for data processing, text processing, and web development.

It is one of the most popular programming languages used today. It is easy to learn and use, making it a great choice for beginners in particular. While simple enough for a beginner's first language, Python also has advanced features that can help experts create complex projects in no time at all. 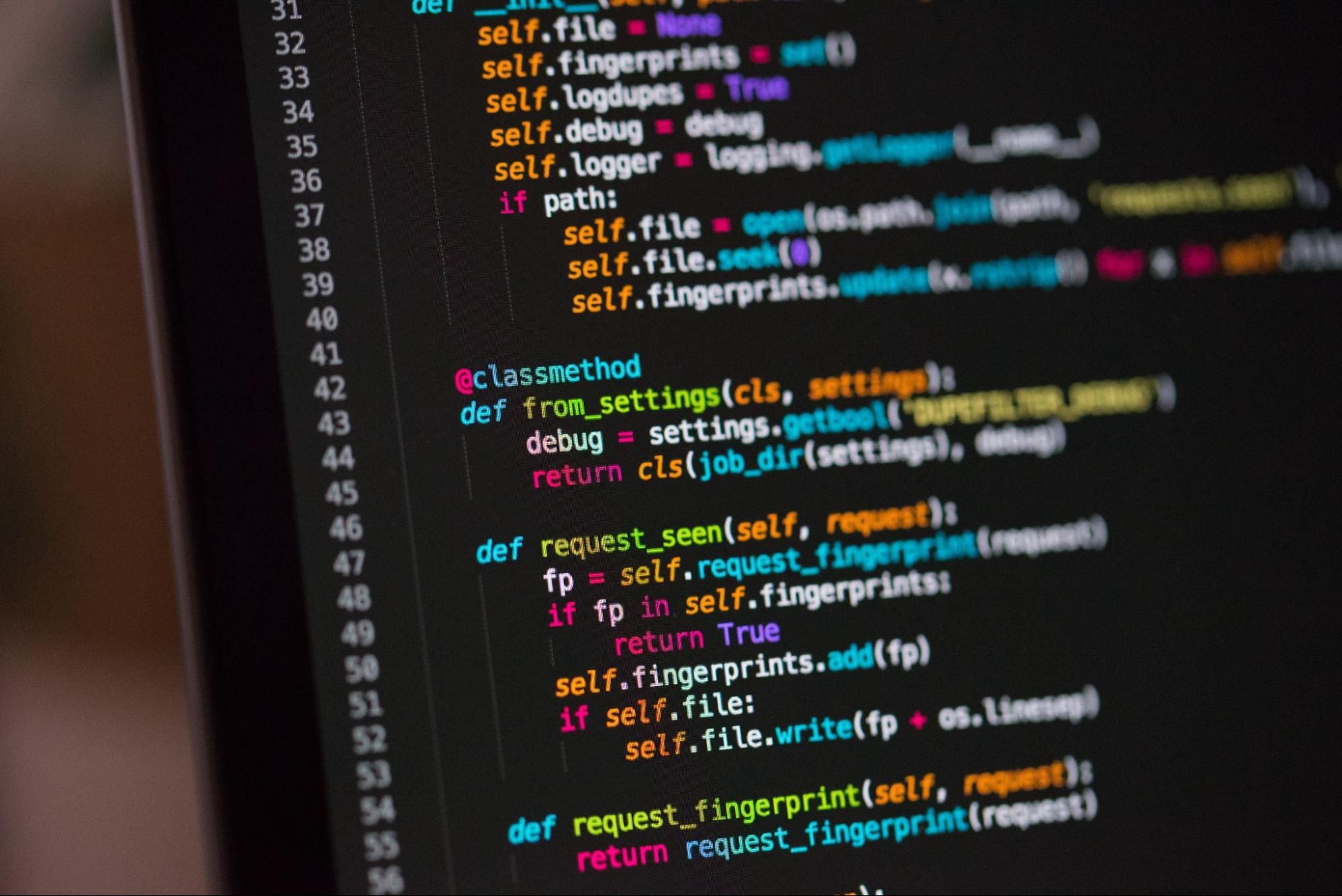 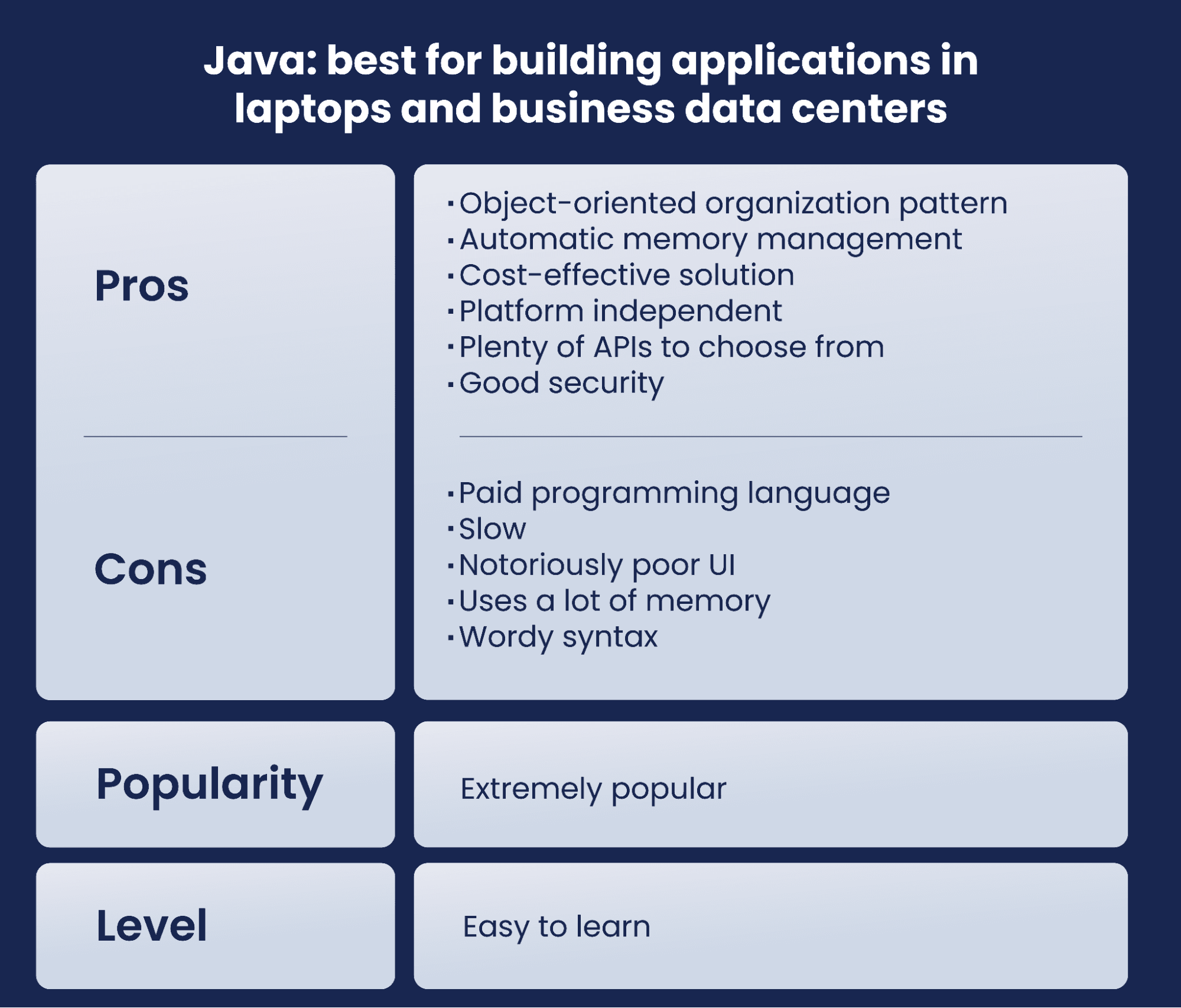 Java is a high-level programming language developed by Sun Microsystems and released in 1995 as a core component of Sun Microsystems' Java platform. The language derives much of its syntax from C and C++ but has a simpler object model and fewer low-level facilities.

The current version is Java 8, which was released in March 2014. They have no plans to go beyond version 9. Still, new versions will be released regularly (every 6 months) with bug fixes and security updates added at regular intervals (typically every few weeks).

Extra Reading: Looking to build your tech team? Catch all you need to know on managing remote engineering teams 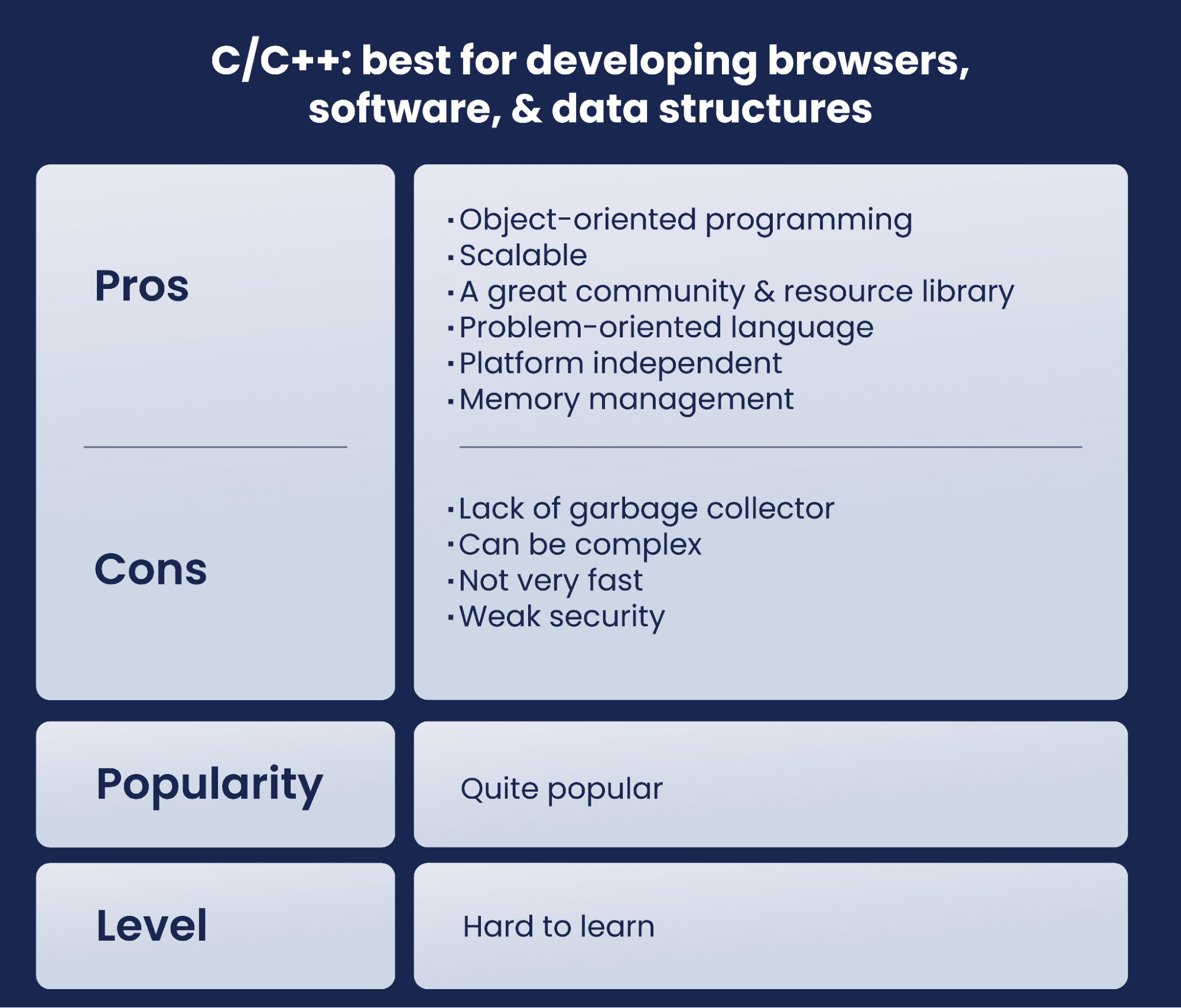 C++ is a general-purpose programming language that provides high performance. It also allows you to write object-oriented code and offers many tools such as templates, exceptions, and namespaces. C++ works well for both client-server and embedded systems, as it can be used on different operating systems.

C/C++ was developed by Bjarne Stroustrup at Bell Labs in 1979 and became an ISO standard in 1998 (ISO/IEC 14882). The latest version is C++20 which was released in October 2018 after 5 years of development by ISO committees working together with the C++ community (including Microsoft). 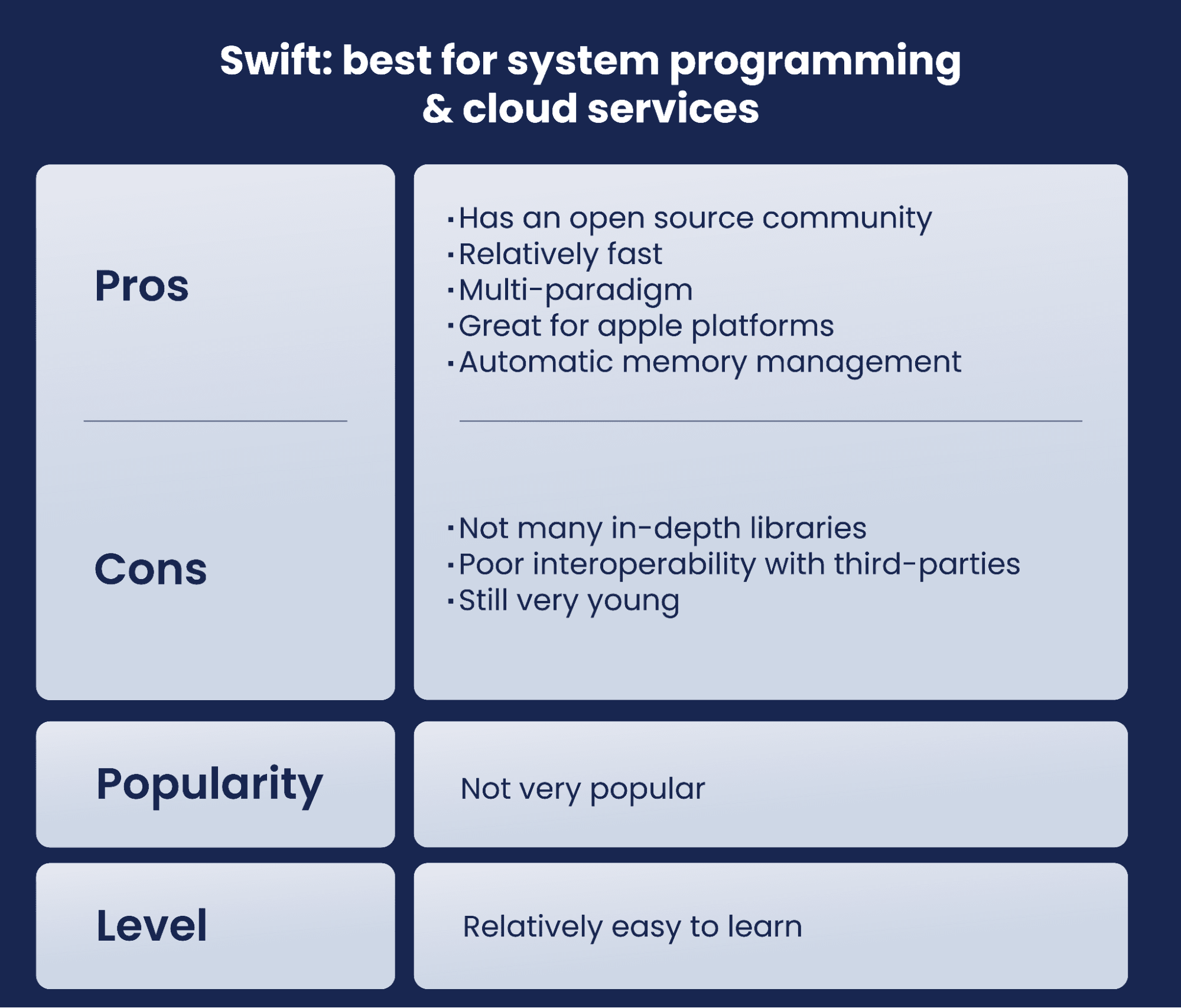 Swift is a general-purpose, open-source, compiled programming language developed by Apple Inc. for iOS, iPadOS, macOS, watchOS, tvOS, and Linux. Swift was first released in 2014 and was the successor to Objective-C. It’s definitely one of the most functional programming languages.

Swift has quickly become one of the most popular languages among developers due to its ease of use and flexibility in terms of mobile application development across platforms like Android or iOS.

Swift also has some advanced features, such as protocol extensions, that allow it to use reusable code without needing subclassing or inheritance (a feature not found in most other modern OOP languages).

6. Kotlin: best for integrating into existing apps and programming for Android 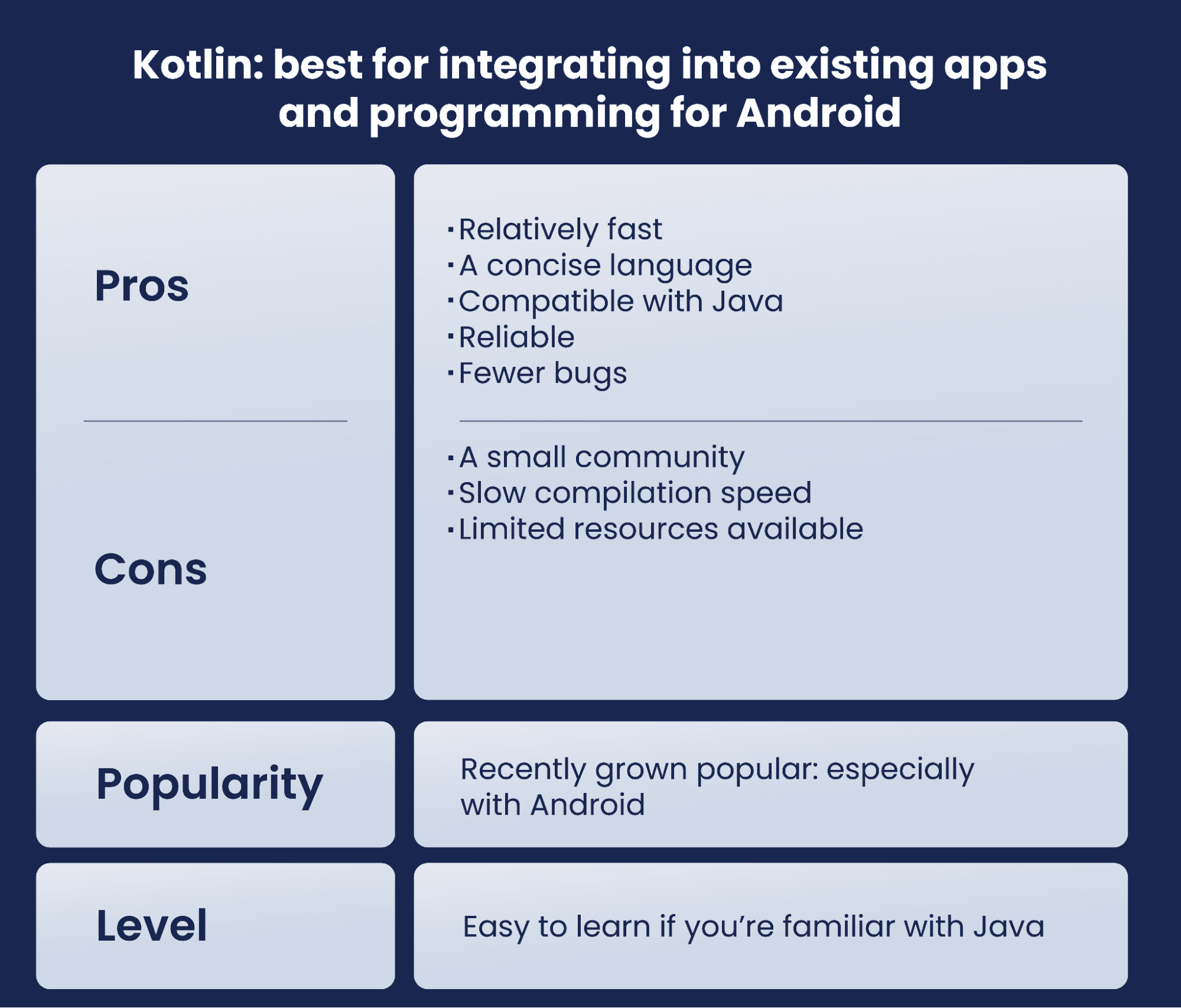 Kotlin is a statically typed programming language created by JetBrains, the same company that makes IntelliJ. Kotlin is used for Android development and it is also being considered as a replacement for Java. It can also be used in web applications. Kotlin can even be used as a scripting language, similar to PHP or Python. 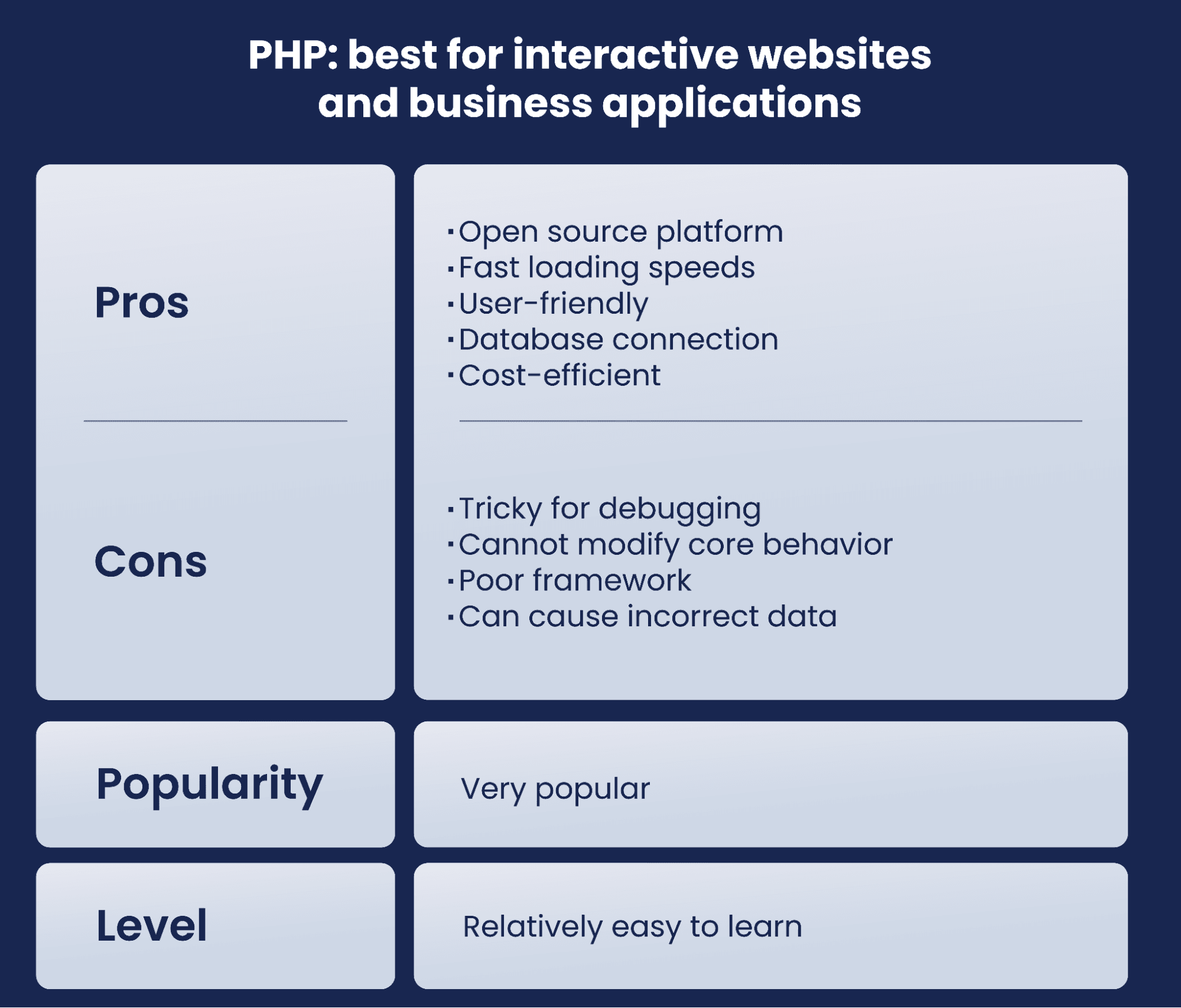 PHP is a server-side scripting language designed for web development. It first appeared in 1995 and has become one of the most popular programming languages on the web. PHP is an open-source language that can be used to create dynamic, interactive websites and applications.

PHP supports a wide range of databases, including MySQL, MariaDB, and SQLite3. It also comes with its own database called PDO (PHP Data Objects).

One advantage of using PHP to develop your website is that it’s easy to learn because it follows many common conventions used by other languages such as C++ or JavaScript.

Extra Reading: It can be tough to find a versatile programmer that knows all the languages you need and is one of the main reasons to outsource talent in tech. 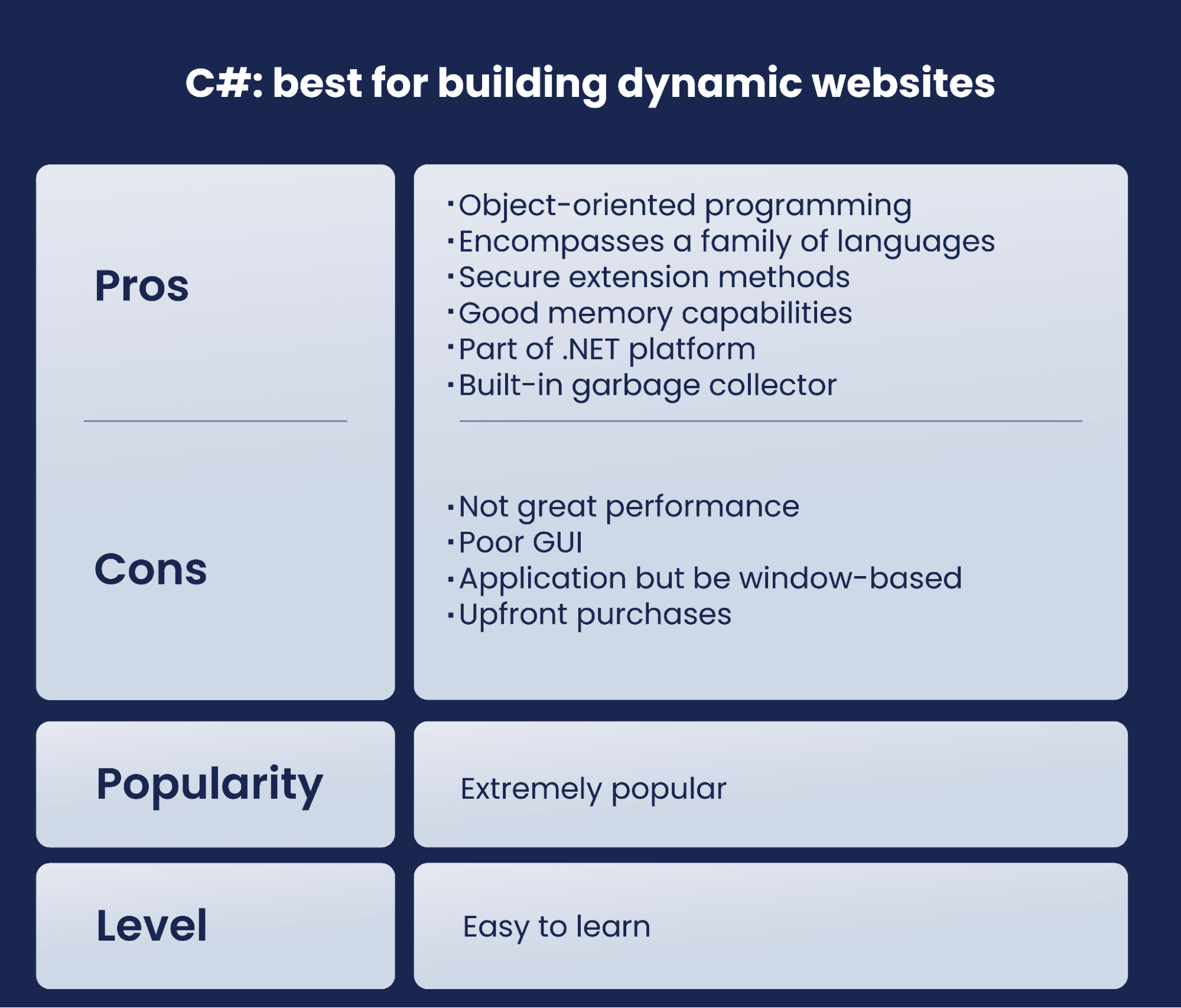 C# is a simple, modern, object-oriented, and type-safe programming language. It was developed by Microsoft within its .NET initiative and later approved as a standard by Ecma (ECMA-334) and ISO (ISO/IEC 23270:2006). C# is one of the most popular programming languages in the world.

C# has been designed to be used with Visual Studio IDE. The .NET Framework provides an application framework for building many different types of applications from web applications to desktop applications using the WinForms library or WPF library. 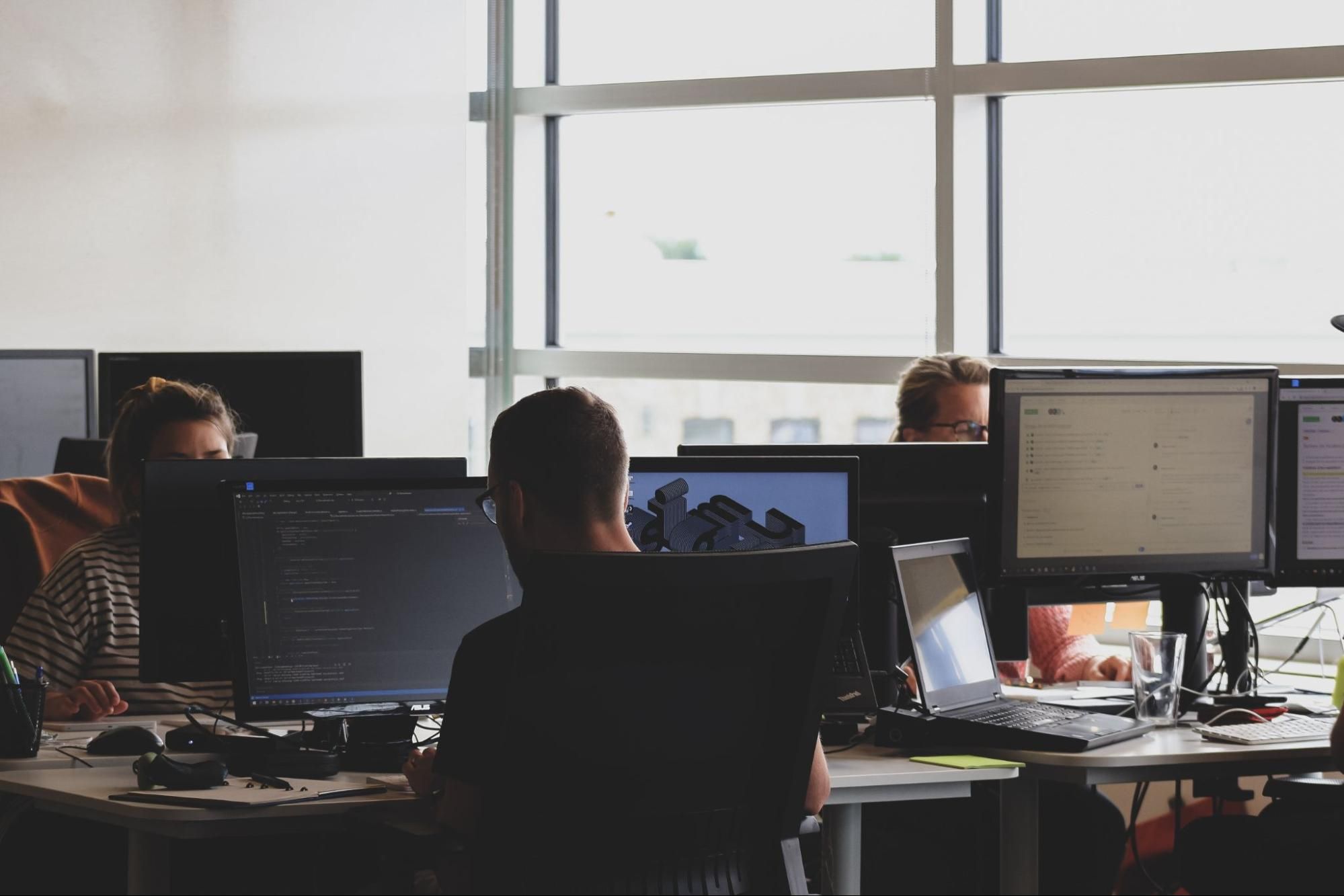 R is a functional programming language designed for statistical computing. It is becoming increasingly popular, and it has been used by Facebook, Google, and Microsoft, as well as major universities such as Harvard University and Stanford University.

R was also named the most popular language for data science in 2018 by IEEE Spectrum magazine. R provides advanced graphical capabilities for statistical data analysis, so it's no surprise that statisticians use it extensively to perform their analyses on large datasets.

R has an excellent online documentation portal that includes thousands of pages on every aspect of the language. If you're looking for help with anything R-related, there's almost certainly already someone who has already asked your question—and if not they will soon!

As well as being a great tool for getting useful answers from experts on how to use the language effectively (both technically and conceptually), its huge community means that if you do run into any issues while learning or using it this can be solved quickly too because someone else has likely already encountered it before!

10. TypeScript: best for extending the technical abilities of JavaScript 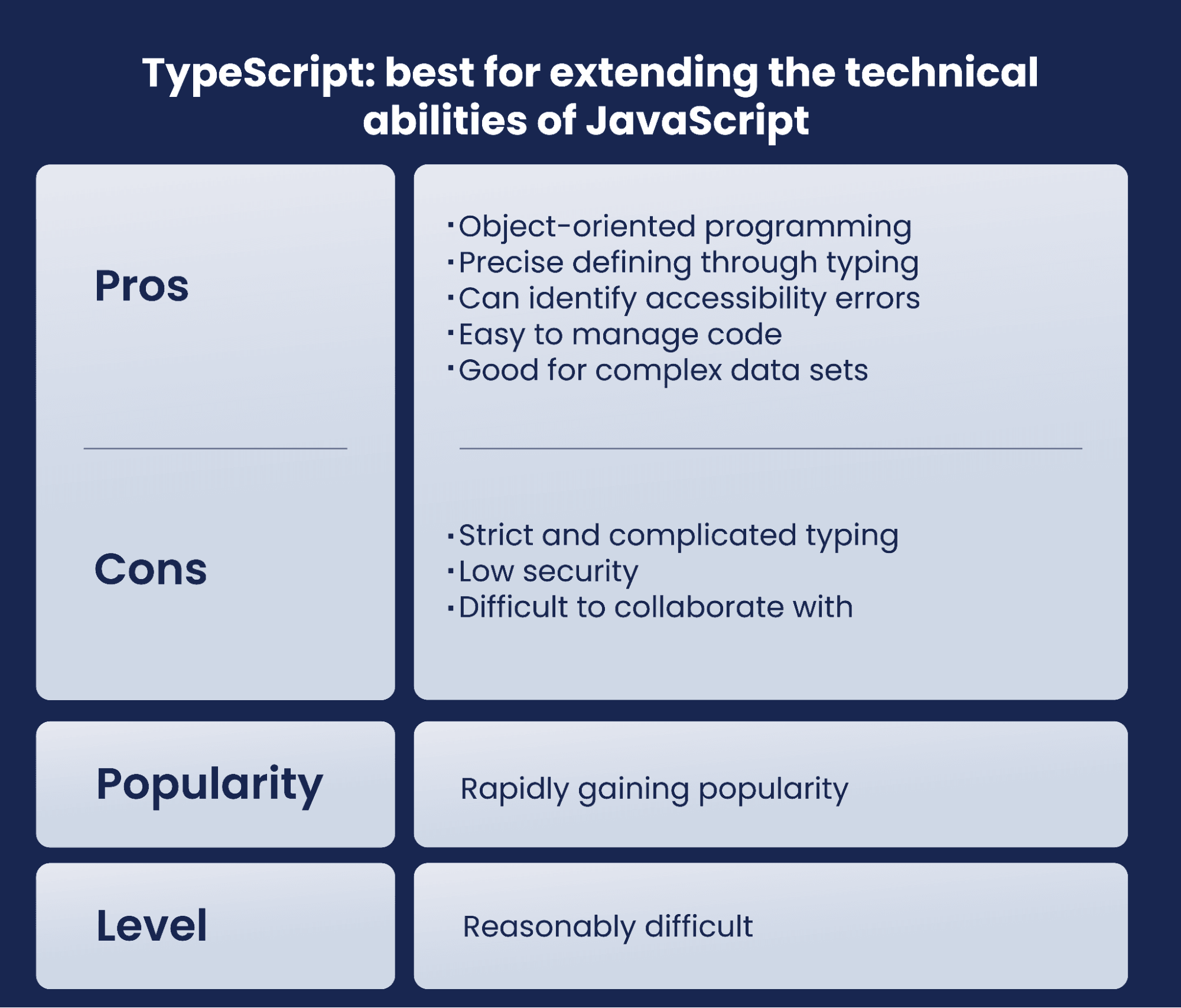 TypeScript is a superset of JavaScript that provides static typing, classes, and modules. It was developed by Microsoft and open-sourced in 2014. Today, it’s one of the most in demand programming languages.

TypeScript's design goals include supporting large applications for the web and on the server, with a compiler that can be executed on the server side or in the browser; its aim is to eliminate runtime overhead compared to common dynamic programming languages while improving developer productivity with features such as classes, type inference, and String interpolation.

TypeScript supports ECMAScript 2015 (ES6) plus some features from ES2019, including async/await functions. It also supports decorators and generics. It’s worth noting that if you’re managing remote developers, you’ll need to find innovative ways to collaborate with them for this language. 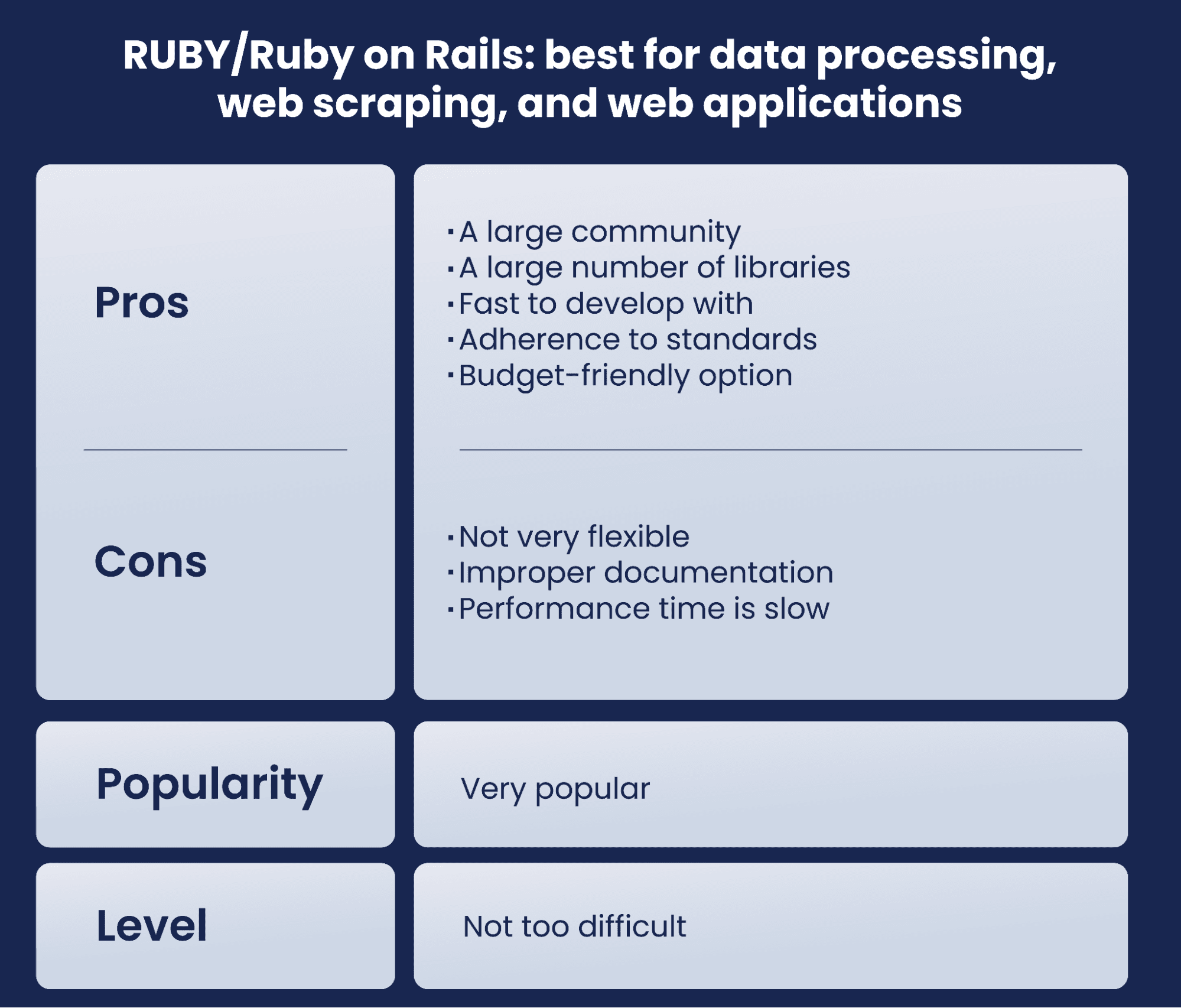 Ruby is an open-source programming language. It was created by Japanese programmer Yukihiro Matsumoto in the 1990s, who intended to make programming easier than it was with other languages of the time. Ruby is a true object-oriented programming language, which means that it's based on objects, classes, and methods—this makes it easy to learn and use.

In addition to being easy to learn and use, Ruby is also a general-purpose language that can be used for a variety of applications including web development and software development in general.

Ruby is dynamically typed; this means that you don't have to specify what type of data something contains before you use it, so long as your program runs without errors when you compile or run it (e.g., "you can print out 2 + '3' without worrying about whether 2 has been assigned an integer value or not").

Also, unlike some other languages (such as C++), Ruby does not enforce strict type checking during compilation; instead, type checking occurs at runtime when variables are accessed for reading or writing operations. 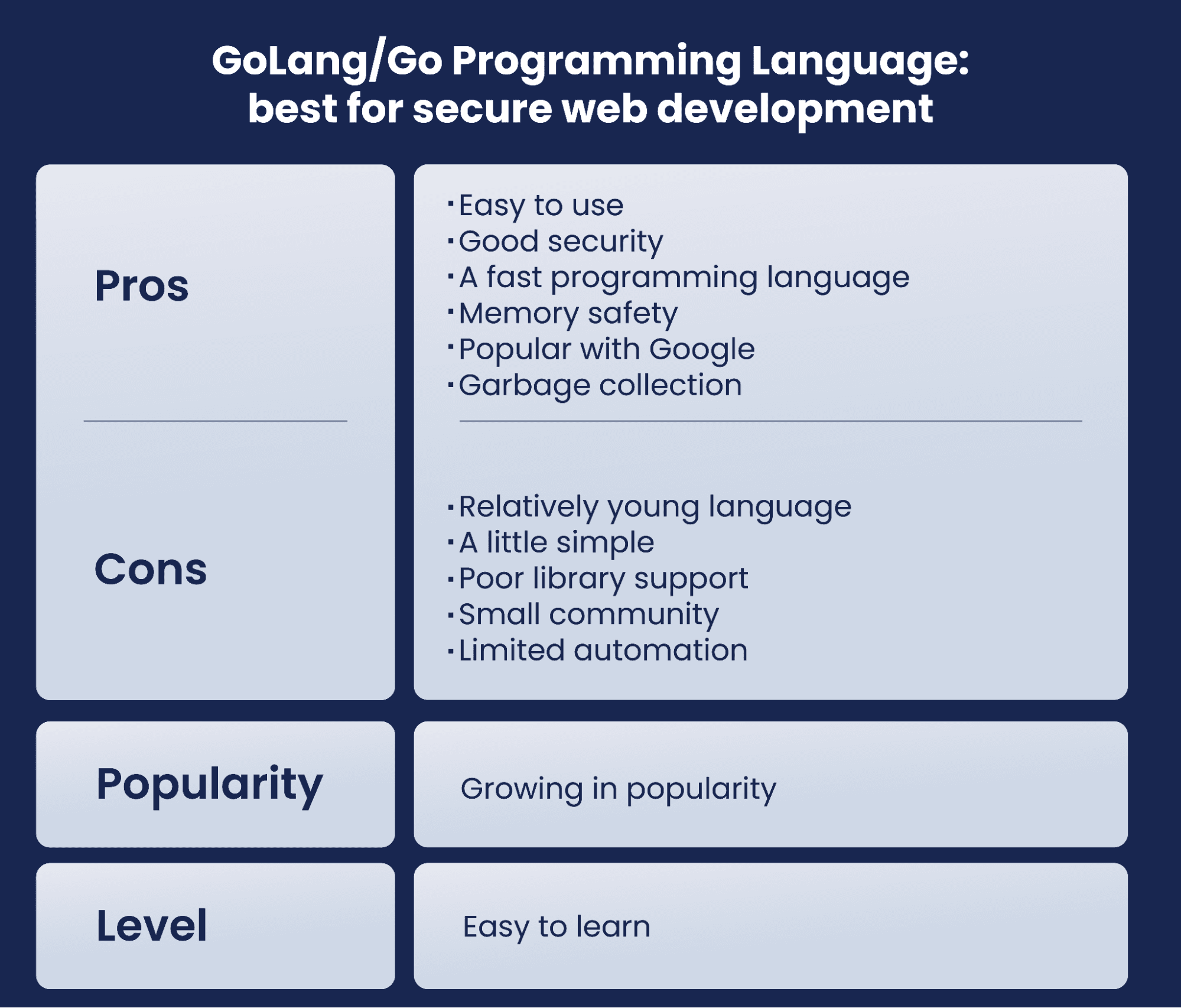 The language has the characteristics of C with some additional features such as garbage collection and dynamic types; it also simplifies memory management (for example, there are no pointers) which makes it easier to write code that’s simpler to maintain over time as well as more secure/trusted.

Go supports multiple return values from methods/functions which makes life easier when you want to return multiple values from a single method/function call without having to create extra variables outside of the function/method body (and potentially forget about them).

Remember, the language doesn't matter as much as the ability to write good code. The best programming language is the one that helps do the job most effectively, whether it's for software development or something else. There is no one "best language" for all disciplines; instead, think about which ones will help meet your goals. 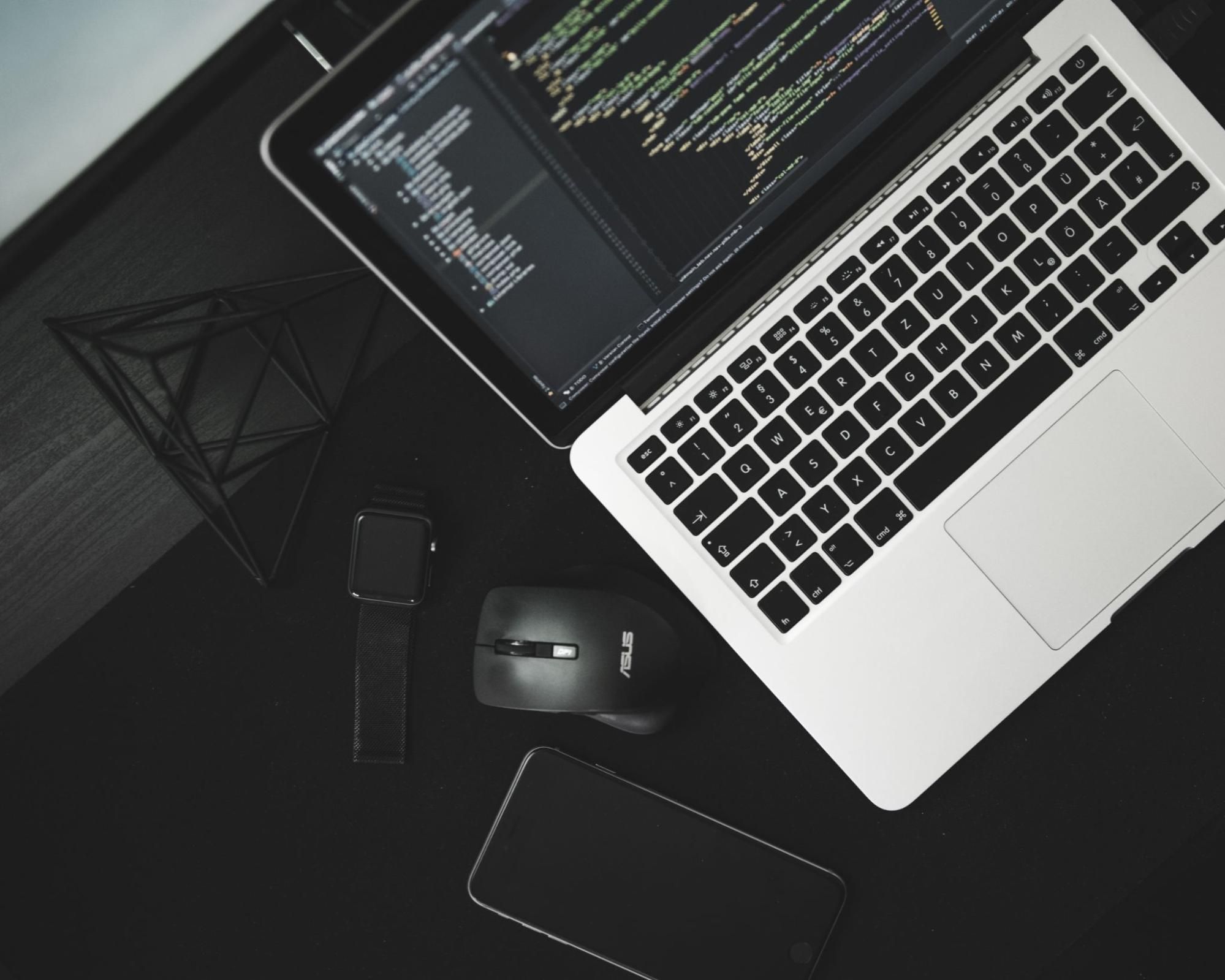 How to find experts in the most popular programming languages?

What makes us the best choice for hiring top remote developers?

How to decide which programming language to learn?

To decide which programming language is the best fit for you, you’ll need to decide the type of products you want to build. Are you interested in mobile or web development? Are you interested in machine learning or data science? From there, you’ll be able to pinpoint low-learning curve languages to get you into the game.

Which programming language is better for beginners?

JavaScript is one of the most popular programming languages for beginners to start with, as it is easy to learn. However, there are a few other popular options like Python, RUBY, and GoLang, which are also relatively easy for your first programming language.

Which programming language is best for deep learning?

Python. It is used by over 66% of data scientists and machine learning developers for deep learning.