How to Hire Python Developers in 2023? Everything You Should Know

Python is one of the most popular programming languages in the world, and it’s only gaining steam. It’s predicted that the demand for Python developers will continue to grow over the next few years. As a result, it's important for companies to understand how to hire Python developers that best suit their teams. To ease things up for you, we have covered everything you need to know about hiring the best Python developers in this blog.

A Python developer is responsible for writing and testing code in the Python programming language. They may work on a variety of projects, such as building web applications, analyzing data, or automating tasks.

Some specific duties and responsibilities for a Python developer may include:

To be successful in this role, a Python developer should have strong problem-solving skills and be able to work well in a team. They should also have a strong understanding of software development principles and experience with Python. Other skills that may be useful for a Python developer include the following:

Why should you hire Python developers?

There are several reasons why you might want to hire Python developers; some of them are:

Python is a popular and versatile language

Python is a widely used programming language that is popular in a variety of fields, including web development, data science, and machine learning. Hiring Python developers can give you access to a pool of talent that is familiar with this language.

Python has a large and active community

Python has a large and active community of developers who contribute to the language and share their knowledge and experiences. This can be a valuable resource for Python developers and can help them stay up-to-date with the latest trends and developments in the field.

Python has a large number of libraries and frameworks

Python has a large number of libraries and frameworks that can be used for tasks such as web development, data analysis, and machine learning. This can make it easier for Python developers to build applications and solve problems.

Python is easy to learn and use

Python is known for being a relatively easy-to-learn programming language, which can make it easier for new developers to get up to speed quickly. This can be particularly useful if you are looking to hire junior developers or are building a team from scratch.

Overall, hiring Python developers can give you access to a skilled and experienced pool of talent that can help you build high-quality software and solve complex problems.

Must read: How to Hire Remote Developers in 2023?

1. Look for candidates with a strong foundation in Python

It's important to look for candidates who have a strong understanding of the Python language and its core concepts, such as data types, control structures, and object-oriented programming.

2. Look for experience with relevant frameworks and libraries

Python developers often need to be able to solve complex problems and think critically. Look for candidates who have a track record of successfully solving problems and who can demonstrate their problem-solving skills in an interview.

4. Look for candidates who can work well in a team

Python developers often work on projects as part of a team, so it's important to look for candidates who can work well with others and communicate effectively.

If a candidate has a portfolio of projects they have worked on, it can be a good way to see their skills and experience in action. Look for candidates who have a diverse range of projects and who can explain their approach and the challenges they faced during development.

What is the salary of Python developers in the US?

However, Python developers with more experience or specialized skills may earn significantly more. For example, a senior Python developer with several years of experience and expertise in a particular area, such as data analysis or machine learning, may earn a salary of $122,000 or more per year.

It's important to note that salary ranges can also vary based on the location of the job. For example, Python developers in major cities like San Francisco or New York may earn higher salaries due to the higher cost of living in those areas.

Here are the average Python developer salaries in major North American cities in 2023: 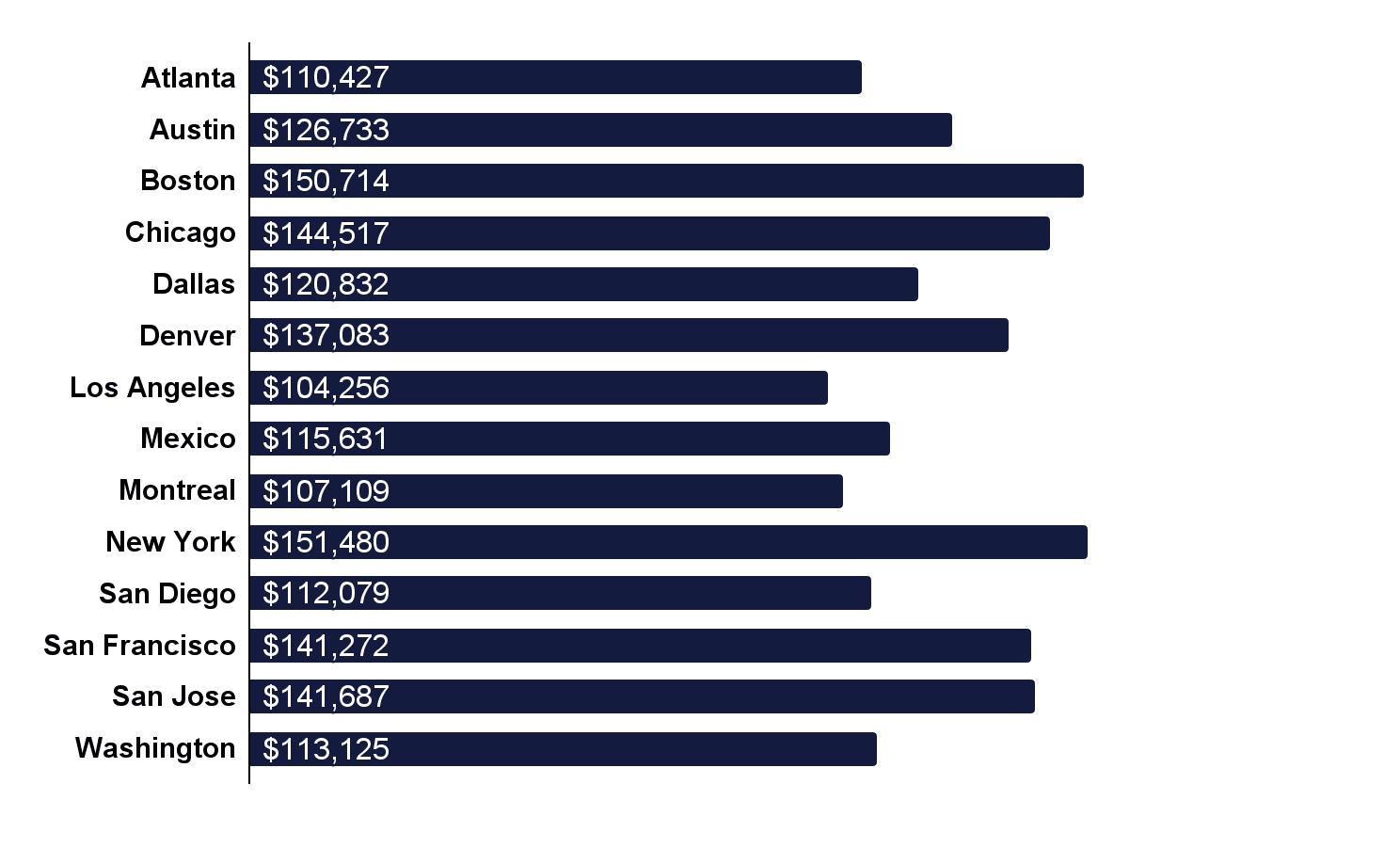 What benefits should you offer while hiring Python developers?

According to Indeed, the most common benefits for Python Developers in the US are:

How to hire Python developers economically?

If your goal is to hire highly affordable yet rigorously vetted remote Python developers, Remotebase can help you in hiring them within 24 hours. All our developers go through an extensive hiring process with multiple technical interviews and are selected after clearing multiple problem-solving and coding-related tests. Best quality and customer satisfaction are our top priorities and that’s why we offer a 2-week free trial without any upfront charges, allowing our customers to work with our expert developers and feel the difference.

Hiring qualified Python developers is becoming increasingly important as technology advances and the demand increases for skilled professionals in this field. With the information shared above, you can now create an effective hiring strategy that ensures finding talented individuals who possess the right expertise needed to make your Python development projects successful in 2023 and beyond!

How do I ensure that I'm getting a good ROI when hiring a Python developer?

To ensure that you are getting a good return on investment when hiring a Python developer, you can:

How do I determine the salary range for a Python developer?

There are several factors to consider when determining the salary range for a Python developer, including the candidate's level of experience and specialized skills, the cost of living in the location of the job and the salary range for similar positions at other companies.

What are some common mistakes to avoid when hiring a Python developer?

Some common mistakes to avoid when hiring a Python developer include the following: